By Doug Collette
December 14, 2019
Sign in to view read count 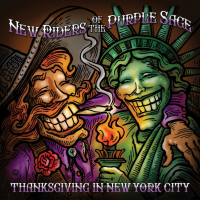 As preserved on Thanksgiving In New York City, The New Riders of The Purple Sage were far more than just a mere offshoot of the Grateful Dead. Initially born in the folk surge of the late Sixties as the latter band's titular leader, Jerry Garcia, initially worked and learned with future NRPS chief songwriter John "Marmaduke" Dawson—"Friend of the Devil" is their most notable collaboration—the fledgling group was further nurtured in the most optimal circumstances possible, the prolific creative output by the iconic band the Dead at the outset of the Seventies.

Studio work including participation in recording American Beauty (Warner Bros., 1979) led to stage experience opening for, then morphing into, the parent ensemble's own performances as its members bassist Phil Lesh, drummer Mickey Hart and novice pedal practitioner Garcia appeared alongside Dawson and guitarist vocalist David Nelson. By the time the New Riders appeared at the Academy of Music in November of 1972, commencing what would turn out to be a holiday tradition of sorts in the Big Apple, they had coalesced into a tightly-knit quintet with the enlistment of bassist/vocalist/songwriter Dave Torbert (a one-time band mate of Nelson's) and Buddy Cage on the hallmark instrument of country music.

Two studio releases this same year, Gypsy Cowboy (Columbia, 1972) and Powerglide (Columbia, 1972) had helped crystallize a collective persona for the NRPS: slightly tongue-in-cheek and more than just a little psychedelic. Their progression had its foundation in the eponymous debut album dominated by Dawson tunes included in this setlist, such as "Henry" and "Portland Woman." Yet those subsequent records had featured a more eclectic selection that only aided in setting forth in greater relief the harmony-laden material (not to mention the New Riders' distinction from its generic country-rock peers of the time as well as many present day practitioners of Americana).

As documented on this recording, captured live to two-track by Bill Culhane and subsequently remastered for this package by David Glasser, NRPS could play muscular vibrant rock and roll. Originals such as the deceptively droll "Groupie" of Torbert's—whose often arcing runs on his instrument here echoed those of his counterpart in the Dead—as well as covers in the form of The Rolling Stones' "Honky Tonk Women—the appearance of which predated the later inclusion in their repertoire of the more overtly c&w styled tune of that iconic band's, "Dead Flowers"—allowed the group to make good use of former Jefferson Airplane drummer Spencer Dryden.

It's a tribute to the latter's savvy musicianship that he doesn't engage in the peripatetic flights of percussion demanded by his prior ensemble. Instead, he exerts a well-honed discipline to navigate the band, even on the frenetic r&b-rooted likes of Johnny Otis' "Willie and the Hand Jive." Dryden likewise restrains himself during more conventional country structures such as that of "Long Black Veil," recorded by disparate likes of Johnny Cash and The Band (on Music From Big Pink, (Capitol, 1968). And he also brings steady timekeeping skills into play as NRPS demonstrate the range of their influence with "Hello Mary Lou," recorded by former Fifties teen idol Rick Nelson before he forged country with rock via his Stone Canyon Band (within whose ranks was bassist Randy Meisner, future member of similarly-styled hybrid visionaries POCO as well as the Eagles).

"I Don't Need No Doctor," by the Motown composing team of Ashford and Simpson, is somewhat far removed from that source, but it does allow the Riders to feature the reliable economy of David Nelson's Fender lead guitar. Cage's purity of tone is equally pithy, as are effects such as fuzz and distortion he utilized so judiciously: both men's virtues become magnified when the lines unfurling from their respective instruments curl around each other, risinginto the air during "Last Lonely Eagle." While this nearly two-hour recording isn't exactly overflowing with presence, the mix is nevertheless clear enough to reveal the potency of the musicians, individually and as a unit.

Even more illustrative of this unit's range than those sonics is the expansive setlist mirrored by the well-rounded essay of band historian and producer of this set, Rob Bleetstein; enclosed in a booklet adorned with cartoonish caricatures similar to those on the cover of this digi-pak, the prose cements an impression of Thanksgiving in New York City as viable addition to the NRPS legacy on its own terms as well as comprehensive companion piece to Dawn of the New Riders of the Purple Sage (Owsley Stanley Foundation, 2020).

About The New Riders of The Purple Sage