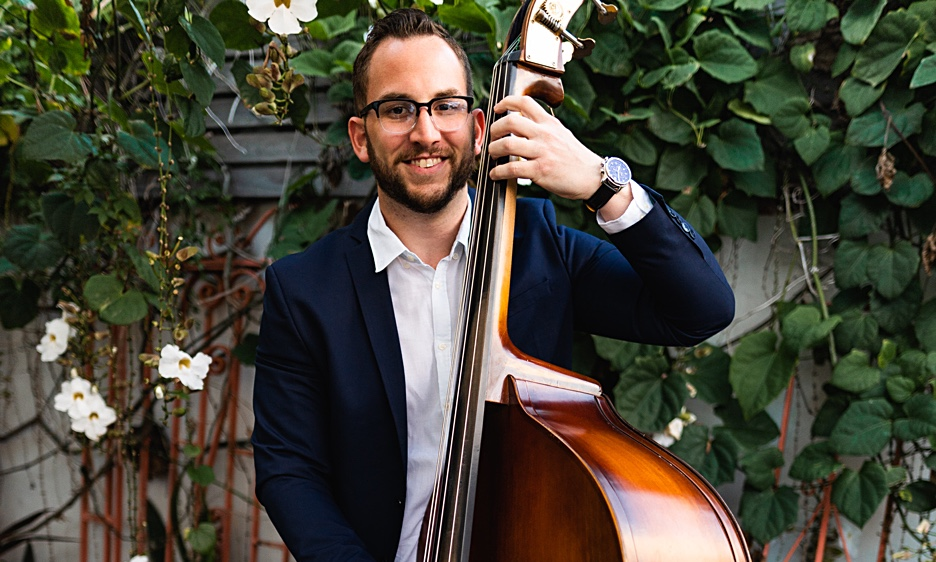 By LuisGa Nunez
December 13, 2019
Sign in to view read count

Shortly after its foundation, the ensemble has had support within the cultural community of Puerto Rico, performing at the most prestigious festivals in the island such as the Heineken Jazz Festival -Ventana al Mar, Claridad Festival, Fiestas de la Calle San Sebastian, among others. They have also been invited by the University of Puerto Rico and the Conservatory of Music of Puerto Rico to perform at their venues. LuisGa has played at festivals such as Playboy Jazz Festival, Montreal Jazz Festival and at the Lincoln Center. In clubs like Regattabar in Boston, Blue Note in New York and Yoshi's in Oakland. He's currently has an Artist Residency at The University of Chicago with Plena Libre.

Right now I'm using a Sire V7 bass and a Shen Double bass with a Realist pick up. For Puerto Rican percussion I use Panderos JN wich have a great sound, size and weight.

My biggest influences are Miles Davis, Eddie Gomez and Eddie Palmieri. Miles was the one who made me fall in love with jazz. The first record I remember listening to was Kind of Blue and then Workin' with The Miles Davis Quintet. His compositions and interpretations always reach the deepest places in my soul. Eddie, on the other hand, made me fall in love with the double bass. His melodious solos, his beautiful sound and playing style were the basis of my development. Palmieri with his big, aggressive and heavy sound just naturally made me dance and in the end, that's what music is for.

Since childhood. When I was little, I used to take books and notebooks from school and put them in my bed like a drummer and played with the sounds that each one generated. Next, I started taking guitar lessons, percussion and then I discovered the bass. I guess I've always known that music was going to be an essential part of my life.

My approach is to mix traditional Puerto Rican music with jazz and current influences. The Núñez Project is based on the genres of bomba and plena -genres of African descent in Puerto Rico—fusioned with jazz, hip hop, Afro-Cuban and other elements. For me, it is important to keep the root of the genre but to then push the limits of our music to create melodies that are beautiful, but at the same time strong. This particular style is influenced by Miles and Palmieri and mixes of both of their approaches.

Musically, I'm introducing Puerto Rican music to an audience that perhaps wasn't familiar with it. Normally, when you think of traditional jazz you think of Afro-Cuban or Brazilian music, because they have had great exponents and a lot of exposure. In contrast, Puerto Rican music is not as well known, and that's precisely what I want to change. The Nunez Project presents a new sound, new rhythms and fusions to the listener who enjoys jazz but also to musicians searching for new horizons. All based on the plena and bomba -the last one brings together at least 16 different rhythms with its variants.

I also believe that this group is a synonym of perseverance and courage. We dared to make a record without the help of any record label or sponsorship, and the people's response to it has been magnificent. This is a sign that we're doing something good.

My dad is a musician so in my house, there is an incredible CD, Vinyl and cassette collection. However, the first CD I bought was Kind of Blue and my first vinyl was The Village Vanguard Sessions by Bill Evans.

Right now I'm listening to some classics and new albums that have come out:

There is a lot of interest in jazz. I think that the academic study of the genre has opened many doors to young people to get involved in the genre. This feeds the genre because it brings new ideas and mergers that we can use to continue expanding horizons. In terms of Latin jazz. I think you interpret as David Sanchez, Miguel Zenon, Antonio Sanchez, Dafnis Prieto and Melissa Aldana are opening the way for my generation to develop within the genre and have more opportunities as Latin musicians.

We are working on what will be the first tour of The Nuñez Project in the United States and Canada for the beginning of next year. I am very intrigued with the possibility of traveling with my music. For the past fourteen years I have been on tours playing with bands and artists, but being able to tour with my own group is something special and definitely a challenge for which the entire band is preparing. Meanwhile, I continue playing in New York and Puerto Rico, as well as working with Plena Libre in our residence at the University of Chicago.

My biggest fear is that people don't react to the music. I like when the audience is part of the show, when they shout, clap or dance. That interaction with the audience is the most important thing to me when I am on stage. Puerto Rican music was made to be danced to. When that does not happen, there's something wrong. I'm thankful that up until now, people react extremely positively when we perform, and positive energy and joyful atmosphere takes over the venue. That is and will always be my number one goal when performing.

Maybe not in the shower or to whistle but I don't know why the melody of "All of me" is always in the back of my mind. Not a single day goes by that I'm not singing "All of my, why not take all of me." I think the answer is clear, it's a beautiful melody and Ella Fitzgerald's interpretation is unique and captivating.

That's a good question. There are two things that I really like apart of music: sports and animals. I'm a huge basketball fan and I practice Crossfit, and I am a certified coach. I would probably be something related to sports, like a reporter or a coach.