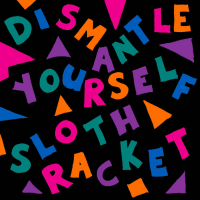 Dismantle Yourself is the fifth release by British baritone saxophonist Cath Roberts' outfit Sloth Racket since its inception in 2015. From the hand-printed sleeves and accompanying zine to the shapeshifting compositions, a home-crafted feel pervades the album, which extends to the punkish bristle exuded even in the quieter moments. Roberts has developed a template for small group interaction, involving the interpretation of graphic scores, which promotes lots of freedom but still engenders a distinct character through judicious use of composed materials.

There is a marked egalitarian ethos at play, and barely a solo as a consequence, as the group typically breaks down into subunits of twos and threes. That is immediately obvious on the opening "Proximity Warning," launched by spiky interplay between Roberts' jostling baritone and Anton Hunter's scratchy guitar. A shimmering transition unveils a choppy trio from Seth Bennett on bass and Johnny Hunter on drums, with saxophonist Sam Andreae's piping and contorted alto. Having set out their stall, the piece eventually climaxes in a three-pronged attack over jerky rhythmic pulsations. It's an exciting start.

After an initial stealthy lope, "We Decide What's Next" introduces a change of pace as it unfolds into a restrained arid terrain illuminated by chuntering exchange and prickly group improv, with Andreae's alto and Anton Hunter's guitar intertwining, and the leader's blustery entrance with Johnny Hunter's drums especially noteworthy. Then, as the saxophones wail, a repeating guitar lilt gradually shepherds them into a closing unison. They also progress towards a final written line—a time-honored gambit used by Henry Threadgill with Air, among others—on "Butterfly Takes The Train," though here with differing emphasis as there is always someone taking liberties during the anthemic finale.

On the title track, a growling heavy-metal riff underpins the horn voicings which evoke the Vandermark 5, still one of the high water marks for small group free jazz, and worthy of emulation. Mercurial bickering reeds hold sway, before dissipating into an ethereal ambience, across which the horn theme re-emerges as a distant eulogy. Roberts favors riffs as part of the superstructure on other cuts too like "Terraforming" although, here as elsewhere, they dissolve into a more intricate dialogue once their job is done.

Roberts is building a strong body of work as an improviser, composer, band leader and co-founder of the Luminous label and LUME collective; Dismantle Yourself can do nothing but further her cause.

Proximity Warning; We Decide What's Next; Dismantle Yourself; Butterfly Takes The Train; Terraforming.