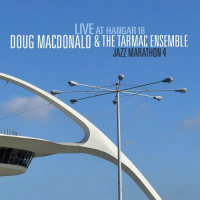 As befits a Jazz Marathon, guitarist Doug MacDonald's Live at Hangar 18 embodies not one but two CDs, complete with shifting personnel and groups that range from quintet to septet. This is the fourth in a recorded series of marathons conceived by producer Don Thomson and led by MacDonald with a supporting cast that boasts a number of Southern California's leading jazz musicians. Hangar 18, by the way, is not a repository for aircraft but a restaurant at the Marriott Hotel adjacent to the LAX Airport.

Needless to say, ensemble passages and solos are beyond question in good hands. Bagg is showcased to good advantage on "My Foolish Heart," Woodard on a robust version of "Where or When," Nepus on yet another standard, "Pennies from Heaven." MacDonald, meanwhile, excels as accompanist and improviser with the quintet. Everyone has a chance to stretch on Herbie Hancock's "Maiden Voyage," which runs for more than ten minutes, and Disc 2's heated finale, Miles Davis' "Tune Up." Other highlights include a pair of Jerome Kern evergreens, "Nobody Else But Me" and "Make Believe" (the last credited here to Alan Jay Lerner and Frederick Loewe), and the septet's tasteful versions of Johnny Green's "Body and Soul" and Antonio Carlos Jobim's "Someone to Light Up My Life." Disc 1's closer, listed as "Strike Up the Band," emerges instead as the opening number on Disc 2. No matter the locale, it's a bright and swinging rendition of the Gershwin standard with solos to match by Shoemake, MacDonald and Bagg.

There's even more to relish on Disc 1 ("Dreamsville," "Lollipops and Roses," "I Thought About You," "With the Wind and the Rain in Your Hair"), all performed by the core quintet. In all, Hangar 18 encompasses nearly two hours of first-class mainstream jazz with a West Coast flair that passes so swiftly that it doesn't seem like a "marathon" at all, more like a pleasant run with some close and amiable companions.

Disc 1: San Fernando Blvd.; Dreamsville; Lollipops and Roses; I Thought About You; With the Wind and the Rain in Her Hair; Maiden Voyage; Pennies from Heaven; Nobody Else But Me; Strike Up the Band. Disc 2: L L; Someone to Light Up My Life; Make Believe; Body and Soul; My Foolish Heart; Where or When; Tune Up.