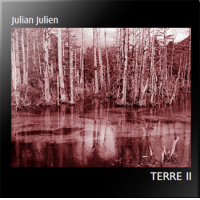 With Terre II, percussionist and composer Julian Julien has given us a thing of cohesive beauty. Though classically veneered, it's a jazz album at heart, mixing two parts right brain for every part left. Joining him are Siegfried Canto (flute), Michaël Havard (soprano, tenor, and baritone saxophones), Rémi Dumoulin (bass clarinet), Guillaume Billaux (guitar), Médéric Collignon (cornet, voice), Adeline Lecce (cello), and Hélène Argo (voice). Julien has chosen these musicians not only by reputation, but for their diversity. Drawing on their backgrounds in jazz, progressive rock, contemporary and classical music, he has crafted a genre-defying artifact worthy of repeated scrutiny.

Julien was inspired to create this music in collaboration with photographers from around the globe, whose work appears in the CD booklet. One might say photography serves as an apt metaphor for the music's escapist qualities, fixing moments in time even as it implies more beyond. Some of the titles, particularly the six so-called "Iris" interludes, make reference to the techniques and mechanisms of traditional (read: analog) photography. That said, what we have here is no mere incidental or illustrative apparatus, but an exhibition of fully rendered atmospheres. Julien himself cites a range of further influences, including, from music: Keith Jarrett (Changeless), Miles Davis (In a Silent Way), Mingus (Blues & Roots), Nils Petter Molvaer (Khmer), Pink Floyd (Atom Heart Mother), Soft Machine (Third), Maurice Ravel, Johann Sebastian Bach; from cinema: Stanley Kubrick, Michelangelo Antonioni, Federico Fellini; and from literature: José Carlos Somoza, Richard Ford, Olivier Adam, and Colum McCann.

If any of these footprints are discernible in the album's "Prélude," they are Ravel and his contemporary, Claude Debussy. Echoes of latter's Le Martyre de saint Sébastien ring palpably through the combination of percussion, electronics, and bass clarinet over a landscape best appreciated from afar. And while Julien gives props to Jarrett and Molvaer, it's Eberhard Weber, more than any other ECM label mate, who seems to foliate the branches of the album's title track.

As percussionist, Julien gives relief to "Ailleurs" (Elsewhere). Described by the composer as "an imagining of a better world without racial, social, or class problems," this exercise in peaceful idealization layers baritone saxophone and flute over blissful vibraphone currents. The voice of Hélène Argo builds a towering silo of lyrical storage in "Une attente" (Expectation), while "Mr. John Barry" pays homage to the English composer of the same name by means of a wordless, groovier diction. The album's deepest paths are reserved for the ambient lullaby of "Doudou" and "Non-Sens" (Nonsense), a nearly eight-minute track meant to evoke the suffering of immigrants that inhales and exhales breaths of digital light.

What I love about this album is how it never quite takes off, content as it is with merest indications of flight. It feels especially genuine for refusing to buy into the empyrean fantasy of lyrical music. If, as Julien himself says, "With art, we can leave behind the mundanity of daily life," then Terre II is an interplanetary jump worth taking with eyes and ears open.