Home » Jazz Articles » Aireene Espiritu: Back Where I Belong 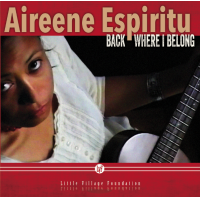 How can someone go back to where they have never been? How can a ukulele playing folk singer accomplish searing blues and soul vocals with such sincere expression and emotion? These are just two of the mysteries surrounding Aireene Espiritu. Her release Back Where I Belong, reveals the answers, and much more.

Though Espiritu has been gigging around the Bay Area for decades, it was at a performance in Oakland (amongst 200 artists) that she caught the ear of Jim Pugh. Pugh is the director of Little Village Foundation, and a highly respected keyboardist with an impressive resume. The idea came to Pugh that since Espiritu is Filipino-American and has a tremendous voice, she would be perfect to cover the songs of iconic R&B songstress Sugar Pie DeSanto, (also Filipino-American) in a back to the future revelation.

Recorded at Greaseland Studios, and produced by Pugh and Kid Anderson, this is a spellbinding session capturing a singer at that precise space in time when all the conditions were perfect. They went back to the DeSanto catalog to cull seven songs, as "Going Back Where I Belong," and "I Don't Wanna Fuss," in a superb revisit to the golden age of R&B. "The One Who Loves You," though covered by DeSanto was a huge hit for both Mary Wells and The Marvelettes, in the 1960's, and looms large in the annals of classic soul songs. "Witch for the Night," is a blazing rocker complete with fancy guitar work and high flying organ, and they slide into the country flavored rumba "Can't Let You Go," with Maurice Tani doing a vocal duet with Espiritu.

The passionate Negro spiritual "No More," represents Espiritu singing acapella, leaving no doubt that she has the voice to cover the broad range of the blues to soul spectrum. Americana favorite "Down By The Riverside," showcases her skills in this genre as well as on the ukulele. She invokes her Filipino heritage on the acoustical numbers "Bayan Ko," and "Oras Na," and is rejoined by Maurice Tani on "Dukha," adding a strong country western nuance.

The blues is a territory where many get lost if not able to navigate the darkness, and where Espiritu feels right at home. The accompanying musicians, augmented by a horn section and strings, make "Ask Me 'Bout Nothin' But The Blues," an absolute stunner. They then take it down to the bottom with "Life Goes On," a barroom crawler where the sweat hits the floor. These two blues really highlight as to why Espiritu is such a potent vocalist. It's not the producers, or the band, but the singer who has to get up there and deliver the message, and the blues is unforgiving, you either have them or you don't.

Though this record was inspired around a Sugar Pie DeSanto theme, it was Aireene Espiritu who rose to the occasion. Stepping way out of her comfort zone, she ventured into a situation she had never experienced and dominated the outcome. Coming to America at age ten, she absorbed its music, took it to heart, and it became her calling. Living out of a car in Oakland, she deserves some of the rewards that having genuine talent should provide, placing her back where she belongs.

No More; Going Back To Where I Belong; The One Who Really Loves You; Witch For A Night; Bayan Ko; Down By The Riverside; Ask Me ‘Bout Nothin’ But The Blues; Can’t Let You Go; My Illusions; I Don’t Wanna Fuss; Dukha; Life Goes On; Oras Na.

Title: Back Where I Belong | Year Released: 2016 | Record Label: The Little Village Foundation