Terje Rypdal: If Mountains Could Sing

By JOHN KELMAN
January 9, 2015
Sign in to view read count 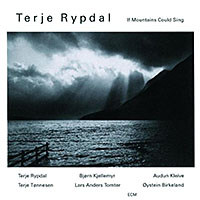 Today's Rediscovery is If Mountains Could Sing, an album that stands out in Terje Rypdal's career for its marriage of his two seemingly (but clearly not necessarily) divergent paths: one, the rock-edged improvising guitarist; the other, the classical composer of contemporary music first inspired when he heard the music of microtonal groundbreaker György Ligeti in Stanley Kubrick's similarly innovative 1978 film, 2001: A Space Odyssey.

It had been six years since the Norwegian guitarist—one of the "big five" Scandinavian musicians brought to international attention in the early '70s by ECM Records when label head Manfred Eicher began producing albums like saxophonist Jan Garbarek's Afric Pepperbird (1970), pianist Bobo Stenson's Underwear (1971), bassist Arild Andersen's Clouds Inside My Head (1975) and Rypdal's own Whenever I Seem to Be Far Away (1974)—last released a record that fit under the jazz rubric, the wryly titled The Singles Collection (1989). In the interim, Rypdal had been focusing on his career as a classical composer, releasing two albums—Undisonus (1990) and Q.E.D. (1991).

If Mountains Could Sing reunited Rypdal's 1980s Chasers trio (with electric/acoustic bassist Bjørn Kjellemyr and influential drummer Audun Kleive) that, In addition to the keyboard-augmented The Singles Collection, was responsible for two of his best post-'70s recordings: 1985's Chaser and 1987's Blue. But it was the inclusion of a string trio—violinist Terje Tonnesen, violist Lars Anders Tomter and cellist Øystein Birkeland— that made If Mountains Could Sing more then simply a Chasers reunion. Instead, Rypdal wrote music for the Chasers (the powerful, free-spirited and freewheeling "One for the Roadrunner" and indigo-tinged closer, "Lonesome Guitar"), for the string trio (the frenetic, Bartókian "It's In the Air," lushly lyrical "But On the Other Hand" and cinematic title track)...and for all six musicians (the viscerally sweeping "Private Eye" and darker-toned "Blue Angel").

But it's the album opener, "The Return of Per Ulv"—a reference to the similarly opening track on the guitarist's 1978 quartet set, Waves, "Per Ulv"- -that has ultimately become one of Rypdal's most memorable compositions. A song with a distinctly singable melody, it has become a regular part of the guitarists live sets with his Skywards trio featuring keyboardist Stále Storløkken (Supersilent, Elephant9) and Italian expat drummer Paolo Vinaccia (Arild Andersen Trio, Bugge Wesseltoft), and can be heard more than once on Vinaccia's Very Much Alive (Jazzland, 2010), a box set that collects live recordings of the Skywards trio from 2000-2005.

"The Return of Per Ulv" also appears on a live concert video recording with bassist Miroslav Vitous, Live from the Jazzcpen, Stuttgart, 1994 (Arthaus, 2005), in an extended version that capitalizes on the song's alternating between solo opportunities for both the guitarist and bassist. But the original recording on If Mountains Could Sing—the most perfect title for music written by Rypdal (who lives in the huge Molde fjord that extends inland 25 kilometres from the Atlantic Ocean and, surrounded as it is by 222 mountains, is one of the country's most striking locales)—remains the seminal performance.

With Kjellemyr alternating between spare, perfectly chosen accompaniment and solo spots as attractive as Rypdal's at times lyrical, at times more busily rock-edged playing and Kleive's ability to be both the perfect groove-meister and interpretive foil, it's both the perfect opener to If Mountains Could Sing— Rypdal's first album to fuse his two longstanding musical interests—as well as a strong reminder just how good The Chasers were.

With Rypdal now playing as well as he ever has—better, even, after recovering from some health issues—it's an album which suggests he might be well- advised to consider bringing The Chasers back into active duty. His Skywards Trio remains a superb context, but there's no reason why he couldn't have two superlative small groups, is there?