By Jakob Baekgaard
October 29, 2017
Sign in to view read count 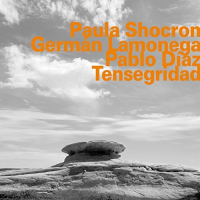 The cover image for Tensegridad, the second album from the Argentinian SLD Trio, looks like a dolmen and it fits the music that both feels ancient and modern. While some types of avant-garde music seek to re-invent the language of music to the point of total estrangement, the strength of the SLD Trio lies in its ability to make sounds, rhythms and melodies that are experimental and inventive and yet almost feel like old folksongs. A new inscription written on an old stone.

The album opens with an extended melodic string motif from bassist Germán Lamonega that sounds like a song from the earth. A thick, woody tone, like vibrations from the universe, supplemented by the restless castanet-imitations of drummer Pablo Díaz. Slowly, the piece builds momentum as pianist Paula Shocron's playing evolves from little pieces of shattered glass to a dramatic statement in minor, using the full vocabulary of the keyboard. In general, Shocron underlines why she should be considered among the most interesting contemporary pianists today. It is simply a joy to hear her multiple and idiosyncratic approaches to the instrument that bring to mind such original artists as Thelonious Monk and, more recently, Craig Taborn.

Shocron returns to the earthly vibrations on "Universo Tiene Sentido" where she recites a poem in Spanish about the universal meeting between sights, sounds and movement. The idea of music being a both spiritual and physical thing is perhaps best understood in a live performance where Shocron sometimes shifts between the piano and abstract dance steps. Music translates into physical movement and physical movement becomes music.

The idea of music as a language that can be connected to the origin of life also comes through in drummer Pablo Diaz' "El origen Del Lenguaje." On his own solo album, Los Transitorios Presentes (2017), Diaz experimented with all sorts of percussion in a rhythmical language that transcended classification and once again he finds new ways to make the drums speak.

In fact, the SLD Trio is all about creating a new musical language based on impressions from the natural and musical world, but in the universe of this trio, past, present and future seem to coexist. All that is left is the sparkling intensity of sounds, rhythms and melodies created in the moment. Truly music worth hearing.