BY DOUG COLLETTE
October 29, 2017
Sign in to view read count 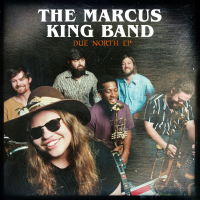 It should come as no surprise that the Marcus King Band is developing a work ethic remarkably similar to Gov't Mule. The latter band's titular leader, Warren Haynes, produced their eponymous second album which was released on Fantasy Records, the same label on which the Mule now resides. And, not coincidentally, MKD has the same management organization, which may explain why the group has engaged in almost constant roadwork since the release of the last album. Not surprisingly, such an unrelenting and assiduous approach to public exposure also extends to recordings, an impression confirmed by the digital only Due North EP issued roughly a year after its sophomore long-player.

The Marcus King Band certainly isn't averse to accommodating cover material during its live performances, so it's only reasonable the bulk of this content would consist of outside songs. But, given the MKB's proclivity to jam, plus the presence of horns in the lineup, it might make better sense to choose the Marshall Tucker Band's "Another Cruel Love" rather than "This Old Cowboy;" the latter signifies the point MTB began to cater more strictly to a country audience, thereby reining in their own improvisational inclinations, not to mention the eclectic grasp the group exhibited on its first two albums.

That said, this studio version of the late Toy Caldwell's song does carry some of the light-jazzy air of King and company's original songs, so the selection makes sense.. Two other studio outtakes from the sessions Haynes oversaw aren't so enlightening, hinting at why neither made the final cut for the album as it was issued. "What's Right" is a blustery rocker on which the band, particularly the bandleader himself on guitar, go a bit over the top, while "Slip Back," at just over six minutes belies the restraint the Marcus King Band has demonstrated on their past studio efforts: the unit comes perilously close to noodling.

A somewhat more creative, not to mention expansive approach comes across on a 2017 live recording from Chicago (the Windy City site perhaps explaining the inclusion of the namesake group's tune). Clocking in at just shy of fifteen minutes in duration, the medley comprised of "Sharry Barry"/"Sliced Milk"/"25 Or 6 To 4"/"I'll Stay"/"Gloomy Sunday," radiates a fiery intensity and ensemble unity that only whets the appetite for more, in no small part because the track fades out in such tantalizing fashion. This track further suggests that a full-length live album might be in order for the next MKB release and that this four-cut collection, ostensibly a gesture of gratitude to the fan base, might better have been a free download (it retails for $4.99).

So, while the very availability of Due North makes a certain amount of sense, on more than one front, the absence of physical product-even in the form of a limited run of CD's or 7-inch singles, for sale only at shows-may not greatly enhance the potential for the Marcus King Band to appreciably widen its audience.