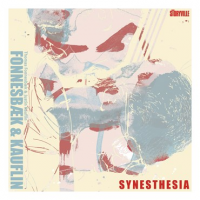 Young US pianist Justin Kauflin and Danish bassist Thomas Fonnesbaek share the neurological condition known as synesthesia, in which the senses become mixed. For the two musicians, this means experiencing sounds as colors with their minds' eyes.

They met in Copenhagen for the first time in 2015. Fonnesbaek recalls, "Besides being a meeting between Justin and myself, it was a meeting of cultures with many similarities and many inspiring differences that we could express through sound in the universal language of music. We quickly discovered that we also shared synesthesia, so that wound up being the title of the album."

What the bassist reverently calls "a most treasured musical experience" was recorded over the course of two days. "Some of the original compositions were prepared in advance and some were improvised on the spot," he says.

The title track is Fonnesbaek's composition and bass-led until Kauflin, who has been blind since the age of 11, comes in to firmly but respectfully state his case, adding pleasing touches of melody that allow the number to build to the point where, with seemingly nowhere left to go, it comes to a graceful, natural halt.

Kauflin's "Lost" is a broodingly melancholic ballad. Cole Porter's "It's All Right With Me" makes a pleasant change from such introspection. But it's not until Fonnesbaek's "Panic Attack" that the duo really cut loose, Kauflin laying down some soulful melodic lines over the happily rolling bass.

"Waiting" is here and there curiously reminiscent of Oscar Peterson's civil rights anthem "Hymn To Freedom." Not surprising: Peterson has been a major influence on Kauflin, who pays back his mentor with a pleasantly subdued work-out of "Nigerian Marketplace."

Some surprising influences are detectable in Kauflin's playing. In the closer "Catwalk" there are even echoes of the "slip note" technique of Nashville session ace Floyd Cramer.

Synesthesia; Lost; It’s All Right With Me; For No One; Panic Attack; Waiting; Semiosis; Nigerian Marketplace; Skybound; Catwalk.