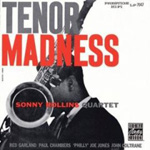 He wasn't scheduled to play, but John Coltrane had his axe in hand when he came to watch Miles Davis' rhythm section record with Sonny Rollins. Trane not only played on the date, but the resulting duet is the centerpiece of Tenor Madness, one in Prestige's latest series of RVG-remastered releases.

Theoretically, Coltrane's appearance on the title track should be legendary—Saxophone Colossus meets Interstellar Space, in a way. However, this was 1956: Kind of Blue was still three years away, and Trane's historic Impulse! recordings were not yet even in the realm of possibility. In short, Coltrane had not found the voice that called us to worship on "Transcendence and mesmerized the Vanguard with the stream-of-consciousness "Chasin' the Trane.

That said, Coltrane's fearlessness is front and center as he takes the first solo, firing flurries and fusillades from the high end of his tenor sax. He is definitely on his game for the time. He's a willing teammate as he trades fours with Rollins on an ending dialogue where the two players happily finish each other's thoughts.

The proof of the pudding is in Rollins' first solo. Taking the tonal low road to Coltrane's high attack, Rollins' tenor has a shape and substance Coltrane lacks. This not only adds to the contrast that should otherwised elude this instrumental airing, but also demonstrates the scope of Rollins' sound. At this point Trane had chops, but Rollins had soul, and the disparity is conspicuous.

For better or worse, the collaboration ends at the conclusion of the one track, leaving us with four quartet pieces that are pure meat and potatoes. Rollins shows his romantic-ballad side on "When Your Lover Has Gone and "My Reverie, gets playful on "Paul's Pal (his tribute to bassist Paul Chambers), and upends Rodgers and Hart's "The Most Beautiful Girl In The World when he switches mid-stream from a waltz to a fast 4/4.

Philly Joe Jones and Red Garland briefly morph "Lover into a mid-tempo piece when they do double time over Rollins' final chorus, pulling back just before Rollins makes way for one of Garland's trademark dancing solos. Jones' following solo evokes Blakey's "Blues March with a military cadence, spurring Rollins to take a harder ending tack. Chambers' foundation work is exemplary throughout the date, and his bowing solo on "Beautiful Girl is just one of many great spotlight moments.

Tenor Madness isn't as valuable a historic document as the recently unearthed 2005 releases One Down, One Up (Impulse!) or Coltrane and Monk's Carnegie Hall disc (Blue Note), but it does offer further perspective. It's a given that John Coltrane was a miraculous player; his cameo here shows how far he went to become that way.

Tenor Madness; When Your Lover Has Gone; Paul