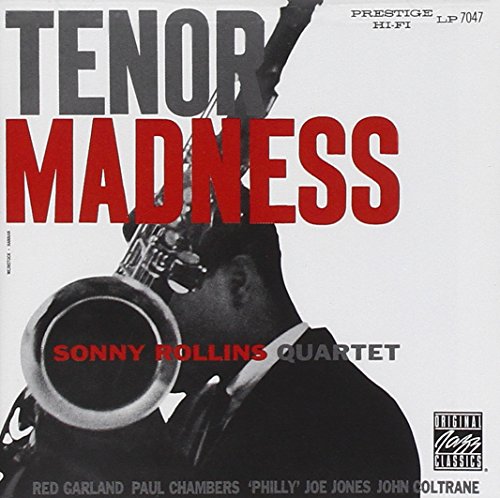 Classical mythology is not the only place where the gods converse. Two of them readily communicate, using the universal language of the blues, for twelve-plus minutes on "Tenor Madness." Touted as the only recorded duet between the tenor titans of the ‘50s and ‘60s, the selection "Tenor Madness" represents the purity of improvisation, jazz and the blues. John Coltrane and Sonny Rollins both interned with Miles Davis and Thelonious Monk, drinking deep from both wells. However, it is a simple swing blues line composed by Rollins over which they exchange ideas at a very high level. This blues line is Rollins’s most famous, save for his much covered "Sonnymoon for Two," which was composed two years later.

Supporting Rollins and Coltrane on Tenor Madness, originally recorded in 1956 and recently reissued, is Miles Davis’s first classic rhythm section: pianist Red Garland, bassist Paul Chambers, and drummer Philly Joe Jones. Collectively, these jazz deities serve up one of the most memorable sessions recorded. Aside from the classic duet, Rollins delivers the expected ("When You Lover has Gone") and the unexpected ("My Reverie," "The Most Beautiful Girl in the World) and the original ("Paul’s Pal"). Fantasy’s remastering efforts considerably clean up the sound. Jone’s drums are crisper and chamber’s bass less muddy; the latter still far from ideal by today’s spoiled standards.

No matter, though, Tenor Madness is a bit of jazz history that occurs when two masters at the top of their games butt heads, producing sparks...of music.

Tenor Madness; When Your Lover Has Gone; Paul's Pal; My Reverie; The Most Beautiful Girl in the World. (Total Time 35:06).