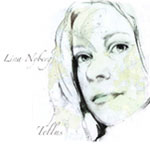 Swedish vocalist Lina Nyberg, like other Scandinavian jazz singers such as Jeanette Lindström, Solveig Slettahjell and Torun Eriksen, brings a rare quality to the music that has become harder to find on the other side of the Atlantic: sensual maturity, candidness, and an admirable insistence not to comply with market rules which tend to target conservative and inattentive listeners. Nyberg, who has performed with some of the best Swedish jazz musicians (including Palle Danielsson, Anders Jormin and Esbjörn Svensson), can be playful, funny and smart. But on Tellus, she takes more risks and explores new frontiers.

Tellus is Nyberg's eleventh disc as a leader and her second for the independent Swedish Moserobie label. She is accompanied by a trio—pianist Mathias Landæus, bassist Torbjörn Zetterberg, and newcomer Jon Fält, a member of Bobo Stenson's trio—but she augments these fine players with some of the most adventurous players on the Swedish jazz scene: reed player Fredrik Ljungkvist and trumpeter Magnus Broo, both from the Swedish-Norwegian Atomic quintet; and guitarist David Stackenäs, a collaborator of Ken Vandermark and Mats Gustafsson.

The original songs on Tellus are arranged as a series of musical postcards from all over the world—tropical Brazil, chilly Vancouver, the Swedish Landala district, the Texan San Saba town, beautiful Italian Pinicio gardens, the Japanese harbor city Yokohama, the Azures resort of Ponta Delgada, and the Chinese capital, Beijing. But these postcards do not aim to sketch geographical landscapes. Rather, they suggest emotional images and sensations that are refined in new territories and discover new romantic possibilities in foreign surroundings. Such is the lovely chamber arrangement of "Vancouver" or the tempting bluesy reed arrangement, by Per "Texas" Johanson, of "Landala." Nyberg's understated presentation of the melancholic "San Saba" intensifies the theme of a breakup. Ljungkvist's clarinet dances around Nyberg's fragile vocals and guitar on "Pincio."

The most adventurous track here is a collaboration with Azerbaijani-native, Stockholm-based singer Aftab Tahami. On "Salwa," Nyberg uses Tahami throaty vocals as an ornament for a thorny drawing of a collapsing relationship. Magnus Broo's trumpet on "Beijing" sounds at first smooth, as if he's following in Chet Baker's footsteps, but soon veers into a more fiery, Lee Morgan-like solo. The duet with Stackenäs on "Berlin," clouded with otherworldly electronic buzzes, features the fractured guitar lines of Stackenäs and the ceremonial singing of Nyberg about reconciliation.