By Jerome Wilson
March 5, 2017
Sign in to view read count 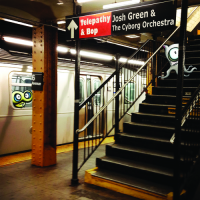 Joshua Green is an award-winning composer who earns his living as Music Supervisor for ITV America, writing soundtracks for various reality television shows and commercials. On this CD he shows off his more creative side, putting together a set of large ensemble works that draws equally from jazz and contemporary classical music.

Green mashes a grab bag of styles together in a quirky manner that recalls units like the Willem Breuker Kollektief. the ICP Orchestra and some of Frank Zappa's bands, but with subtler humor. The opening piece, "Boy & Dog in a Johnnypump" is a dense swirl of big band instruments and strings featuring cyclical patterns out of Philip Glass, frantic rock guitar solos by Sungwon Kim and an underlying quasi-Latin syncopated beat.

"The Lauer Faceplant" refers to an accidental encounter Green once had with Today Show host Matt Lauer and reflects his soundtrack background. It creeps along in an ominous but satirical fashion like Henry Mancini's scores for the Pink Panther movies but with a lot more angles and sharp turns and broad tenor sax and trombone solos. "La Victoire" is a lush piece of atmospheric writing reminiscent of some of Maria Schneider's work with nice integration of accordion and strings and lovely solo turns for piano and tenor sax. "Reverie Engine" has a percolating rhumba beat tossed around the orchestra with more Glass-like repetition before Todd Groves swoops in with an infectious EWI synthesizer solo. "Soir Bleu" mixes tangos, circus waltzes and swing music into a freewheeling dance led by accordion and clarinet.

Not everything is done by the full orchestra. "Improvisation and Nebula" is a solo piano piece performed by Michael Verselli full of dark moods and ominous spaces in the manner of one of Green's influences, composer Gyorgy Ligeti. The title piece is a suite Green wrote as a tribute to Michael Brecker on his passing. It features Todd Groves on tenor moaning and rippling around the keening strings of the PUBLIQuartet and Cody Brown's drumming with sections of percussive leaps and hiccups alternating with undulating melody lines.

Joshua Green shows a command of a range of styles, presenting dark and thorny classical works as well as more accessible collages of jazz, humor and familiar soundtrack motifs. Hopefully the demands of his television work don't prevent him from putting out more fascinating music like this in the future.