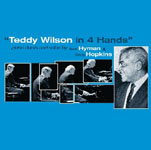 We have yet to reach the halfway point in 2008, but a top contender for Best Jazz Piano Album of the Year has already emerged. Jazz institution Dick Hyman and Chris Hopkins celebrate the legendary Teddy Wilson with this duet release, recorded in late 2006.

The release contains seventeen selections, most of which are tunes that Wilson recorded when he was a member of the Benny Goodman Orchestra (and smaller Goodman-led combos) in the 1930s. All but four of the tracks feature Hyman and Hopkins in duet, playing music that ranges from Joplin-esque stride to playfully humorous to full-on romantic. One only has to hear the opening track "Dizzy Spells" (penned by Wilson, Goodman and Lionel Hampton) to appreciate the true potential of hearing what can happen when these two virtuosos are present in a studio, armed with their own respective pianos. On said tune, the players don't "tickle" the ivories...they shred them.

The duo investigates a number of standards such as "Oh Lady Be Good" and "I've Got the World on a String," but also makes time for more curious selections with which Wilson had some affiliation. For instance, Hopkins plays a solo performance of "Melody in F" by the classical pianist Anton Grigorjewitsch Rubinstein. According to the liner notes, Wilson recorded this as part of a mailorder album entitled Teddy Wilson School For Pianists. Good luck finding that one at Borders.

Each pianist gets a few solo numbers and those are just as enjoyable as the duets. Hopkins' other selection is a lovely reading of "These Foolish Things," while Hyman's showcase includes a terrific recording of Kay Swift's "Fine and Dandy." The aforementioned liner notes definitely enhance the experience of listening to this disc, as they contain a track-by-track analysis outlining exactly how and when Wilson became associated with each one. Therefore the album also serves as a catalyst to seek out a lot of great music from Wilson's musical prime.

Dizzy Spells; Bei Mir Bist Du Schon; Oh; Lady Be Good!; Diga Diga Doo; I'll Never Be The Same; Opus One Half; Melody in F; I'll Get By; Fine And Dandy; Blue Interlude; Runnin' Wild; These Foolish Things; Sunny Morning; I Surrender; Dear; Miss Brown To You; I've Got The World On A String; You're My Favorite Memory.