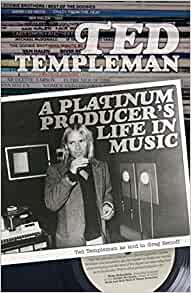 It's some measure of Ted Templeman's humility that so many of the photos that appear throughout A Platinum Producer's Life in Music do not feature him. Rather, those musicians and technical personnel with whom he collaborated over the years are prominent, as are the rooms and locales where he worked and/or found inspiration. Ultimately, this memoir as told to Greg Renoff is more about what Templeman did than about Templeman himself.

But that's not to say his personality does not crystallize during the course of these four-hundred fifty some pages. As he recounts his early life and initial musical endeavors, the producer of the The Doobie Brothers, Van Halen and Van Morrison, among others, adopts a matter-of-fact tone early on and more or less maintains that attitude throughout. Unlike the initial going in many such volumes, the writing of which often sounds as forced as its author is disinterested, Templeman and Renoff manage to imbue the chapters on childhood, adolescence and young adulthood with its subject's growing curiosity about and fascination with significant occurrences. Not surprisingly, those events related to music are most prominent (and indelible), such as seeing The Beatles in concert.

As a result, these accounts of Templeman's early education and nascent amateur/professional musical endeavors carry a certain inexorable, almost inevitable quality. And that's especially true when he finds himself growing interested in the recording process, wholly naturally and without contrivance or predisposition. Attendance at recording sessions for Frank Sinatra, among others, ignites a passion to learn in Templeman and with each successive account of such experiences, he is careful to note its most salient point(s) in summary. Tellingly, most all of which lessons become noteworthy from a variety of perspectives as his career evolves and he duly notes them as they occur (again).

A Platinum Producer's Life in Music is an extremely rapid read. Perhaps that's because, as Templeman told it to Greg Renoff, he was consulting notes the likes of which he references early and often or was perhaps excerpting from a personal journal. Either way, the narrative proceeds with as much speed as clarity. The discourse is well-organized and to the point, with just enough color to preclude any sense of sameness that might otherwise arise from the similarity in settings from chapter to chapter: after all, these entries are almost all descriptions of prepping for and conducting recording sessions. Such exercises, of course, can vary as widely as the individuals involved, artist-wise and otherwise in terms of technicians, producers, engineers, etc., but there is a common denominator here, whether it's a chapter devoted to the Doobie Brothers or Van Halen, and that's Templeman's increasingly well-honed expertise.

The prodigy and the author of band bio Van Halen Rising (ECW, 2015) are also wise to include just enough content removed from studio and stage. On the latter front, for instance, the author continued performing intermittent sit-ins with the likes of clients such as California chanteuse Nicolette Larson, even as he became a Warner Brothers Records vice-president. Just regularly enough too revelations appear in the form of details about the subject's personal life, such as his wife's first pregnancy, or his ancillary activities like the real estate endeavors that constitute a direct outgrowth of his rise in his compensation proportionate to his string of professional successes. There are but scattered references to substance abuse for the better part of the book and that makes perfect sense: such remarks might otherwise seem self-serving if they did not in fact sow the seeds for the dramatic finale. Generally speaking, Ted Templeman is intent on accentuating the positive here.

Any suggestions to the contrary, as in his mentions of Van Halen's hindsight concerning career finances, among other topics, are vague but clearly a sore point. And Templeman addresses those at the appropriate time, i.e., later in the book. More in line with the general tenor here (but short on a genuinely self-serving attitude) are the author's consistent kudos to his regular engineer of choice Donn Landee: Ted peppers the book with observations on the pair's synchronous thinking, a shared work ethic and Landee's technical skill in and of itself. Add to that a generally bright and forward-thinking perspective on individuals with whom Templeman worked—label executives Mo Ostin and especially Lenny Waronker (who took Ted under his wing early on and maintained a close relationship)—and therein lies a vivid picture of the machinations in a record industry, for all intents and purposes, now defunct, at least in the form the author knew it (and actually fostered with his own work).

In that regard, Ted Templeman's is a unique story from a unique time. The boom of music as artistic, cultural and financial force in the Seventies and into the Eighties allowed a mix of the three factors into which this tome offers some keen insight from an unusual perspective. Not only is Templeman a musician himself but one with a professional history; having been a member of the marginally successful Harper's Bizarre, these reminiscences of his offer multiple viewpoints, not only from his main role as producer, but also a player who can offer peer advice even to the likes of the idiosyncratic Morrison (with whom Templeman bonded to a surprising degree given the Irishman's irascible nature). And as Ted's star rises and he is recognized accordingly, his angle on any given project is invariably that of a businessman ever cognizant of the proverbial bottom line.

In the end, it's not necessary to be a fan of those with whom Templeman partnered to make records. Working with the Belfast Cowboy, Eric Clapton and Little Feat may or may not be any more or less fascinating than the manner by which Ted navigated the somewhat tumultuous group dynamics of the Doobies or Van Halen, yet the very intricacy of those relationships woven should pique the curiosity of music lovers otherwise not enamored with certain select collaborators; for example, it's certainly more than a little amusing to hear Templeman's prescient thought about replacing original VH vocalist David Lee Roth with Sammy Hagar. The latter, who he initially knew through association with guitarist Ronnie Montrose (a sideman of Morrison's circa Tupelo Honey (Warner Bros., 1971) eventually joined the group upon the former's departure in 1985.

Unfortunately, Templeman's accounts of serendipity verge on namedropping at times. Contrary to his usually charming and ingratiating self, he occasionally comes off borderline unctuous: there are readers who will no doubt be skeptical he's really that close with Linda Ronstadt, Neil Young, Carly Simon, et. al.? But then, this is a story that takes place within a fairly tight knit creative and commercial community in California, so the bonds are all plausible. Add to that basic premise the practical realities of Ted's Grammy Award winnings and the story he saw and now relays it becomes credible, at least for the duration of (t)his tale as told to Renoff. But what reads like a series of entertaining and psychologically insightful vignettes, apocryphal or not, concludes with drama coming full flower from those aforementioned scant traces sprinkled into earlier passages.

In marked contrast to the streamlined and largely upbeat tenor of what precedes it, the final fourth of A Platinum Producer's Life is devoted to accounts of less-than-positive experiences of Templeman's. He isn't so much regaling the reader with melodrama than offering a confessional of sort. Consequently, this slightly patchy composite of circumstances, devoted largely to the collaborations (sic) with Van Halen circa 1984 (Warner Bros., 1984) and Aerosmith's "comeback" album (ironically titled?) Done With Mirrors (Geffen, 1985), may in fact be a vivid reflection of the author's ragged state of mind at the time; having been fired from his upper position at the label when seismic shifts in the record business began to occur, Ted may be excused if thinly-veiled criticisms sound like nothing so much as a number of axes grinding. He would seem to be settling some scores here and, while on one hand it's perfectly natural given this platform to speak, it's still somewhat unbecoming of the persona he's created to that point.

But the intelligence of Ted Templeman so prevalent prior in this writing rings loud and clear through his voice within a flash of personal insight when he describes his bout(s) with depression and the not-so-coincidental uptick in his use of alcohol and drugs. Notwithstanding the anonymity he maintains on behalf of the individual who purportedly rescued him as he bottomed out, physically and mentally, it's the relative candor, almost an offhandedness, of this particular vantage point on his self-portrait that lends extra and significant substance to the snapshots and action pictures that otherwise comprise this dual professional and personal chronicle.

About The Doobie Brothers