By Dave Hughes
November 1, 1999
Sign in to view read count 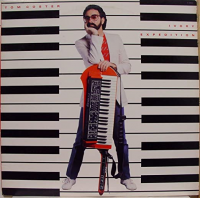 This CD presents two albums recorded by Tom Coster in 1981 and 1983. These sessions took place just a few years after Coster's six-year stint with Santana. Many hints of the music Coster composed and performed with Santana show through on some songs, such as the ballads "Magical Moments" and "I Give My Heart to You", although guitarist Joaquin Lievano (fresh from three years of high-octane fusion shredding with Jean-Luc Ponty) often lends the tunes a harder-edged fusion bite than Carlos Santana. (Fantasy FCD-24749). Examples that should send chills down the spines of guitar-god worshipers include "The Dragon" and "Zulu Queen." But it's not all thrills and chills; Coster displays a gift for composing beautiful, evocative melodies on many of the slower and mid-tempo selections. Some of the wide-ranging styles heard throughout the disc include fusion, latin-rock, bebop, balladry, and occasionally classical.

So how well does this music, 16 and 18 years old, stand up over time? Remarkably well. The constantly-varying synth textures still sound interesting, and a good tune is a good tune, in 1981 or 1999. The synthesizer voicings are particularly remarkable when you consider that in the early 80s, many synthesizers were still monophonic or offered only a few notes of polyphony, and they had a limited number of sound possibilities. Coster would run his keyboards through guitar effects pedals and combine that with other sound-altering technologies that were available at the time. This was made before MIDI and digital sampling. But the sounds and the chops always serve the music, never vice-versa.

You Said; Magic Moments; I Give My Heart To You; Angels Have Wings; The Dragon; The Prince; Can't You Stand It; Ciao; Zulu Queen; Caravan; Gigu; Till We Meet Again; Caught In The Act; Ivory Expedition; Monkey See Monkey Do; I Give You My Love; Sacrifice At Dawn; Journey's End.