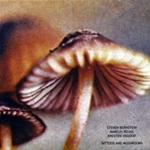 The line-up of slide trumpet, tuba and drums is, to say the least, somewhat unusual in jazz. As is the choice of Hank Williams' "So Lonesome I Could Cry" as a vehicle for improvisation. On Tattoos and Mushrooms, trumpeter Steven Bernstein, tubaist Marcus Rojas and drummer Kresten Osgood go boldly into aural regions where no man has gone before.

To put it another way, this is not what Count Basie called "music to pat your foot to." Indeed, there are some deeply disturbing sounds on this album.

Bernstein is best known for his work with Lounge Lizards, Sexmob, Spanish Fly and the Millennial Territory Orchestra. He has also played with Aretha Franklin and Linda Ronstadt. Rojas has performed and recorded with Michael Jackson, Ray Charles, Paul Simon, Stevie Wonder, Donnie Osmond, Dr. John, Harry Connick Jr. and Aretha Franklin. He has also written more than sixty film scores including The Muppet Christmas Carol (1992). Like Bernstein, he too lives outside of musical convention. Denmark-based Kresten Osgood made his debut with the landmark album Og Hvad Er Klokken(New Net Music, 2000). He "practices and respects the entire jazz tradition while demonstrating an inquisitive and questing approach to the whole spectrum from blues, jazz, funk, hip-hop and techno to free improvisation."

Hank Williams fans may find the treatment of their hero's plaintive anthem a trifle irreverent, opening as it does—to revert to the initial Star Trek analogy—with what sounds remarkably like a Klingon war party working itself into a frenzy in preparation for an attack on Planet Zog. However, following this, Bernstein states the theme—quite recognizably—accompanied at a later stage by Rojas, whose solo then returns the action to Planet Zog where the victorious Klingons now appear to be gleefully tucking into a trough of glagh, their favorite food.

Saxophonist Charles Brackeen's "Prince of Night" features Rojas producing weird drone-like sounds in diverse registers before Bernstein arrives on the scene to introduce a semblance of melody. Then there's Osgood's possibly ironic, perhaps iconic "Hope for Denmark," which at times sounds like a prelude to "So Lonesome I Could Cry."

It is interesting to speculate on what Thelonious Monk would have had to say about this trio's avant-garde treatment of his signature tune, "Thelonious." Again, only when Bernstein gains access to the microphone, is there any melody. Hardly surprising, given the instrumentation.

Then it's back to deep space for more furious wheezings and grumblings as the Klingons leave Zog, watched nervously by the shades of Hank Williams and, perhaps, Monk. In the interests of impartiality and fair play, it remains only to be recorded that Jan Strand, writing in the Swedish jazz magazine Orkester Journalen thought this "one of the year's best albums, already—in February."

Prince of Night; Hope for Denmark; Thelonious; Scaramanga; Abington; Eastcoasting; So Lonesome I Could Cry; Khumbu; The Beat-up Blues.