Sexmob is a band of the now: post-modern waltzes mutating into dub-echoed free jazz. Sexmob is social music: a rollicking midnight set with clatter and drinks and a band. Sexmob is a happy contradiction: an experimental jazz outfit whose music has slid readily into the mainstream via Saturday Night Live, MTV, and National Public Radio.

The winners of two Downbeat Critics' Polls (Best Beyond Group, Best Acoustic Group) have made what bandleader and trumpeter Steven Bernstein calls his "dream record." After four LPs focusing on the songbooks of others (including Duke Ellington and James Bond composer John Barry), the seven-year running Sexmob has turned in an album of original material in their own unique voice, the result of an ongoing dialogue between master players (saxophonist Briggan Krauss, bassist Tony Scherr, and drummer Kenny Wollesen) and a diverse palette of inspirations ranging from the Art Ensemble of Chicago to Dixieland to Little Richard. "The album is really about the evolution of the band," Bernstein says.

I wanted to make a record for music-heads," continues Bernstein, the man who the New York Times called a "rogue historian of jazz." "I think everyone has a music-head inside of them," he says. "I wanted to turn people on the way the Charlie Haden Liberation Music Orchestra record turned me on. It was real listenable, but there was all this slightly scary stuff going on there. It's not background music. And neither is this."

If anyone could fuse lovingly academic excursions with good time party music, it's Sexmob, who have found themselves in the weird and desirable niche as the downtown scene's late night hang of choice, a favorite of fans, musicians, and critics alike.

And then there was Rudd, whose presence brings Sexmob full circle. A longtime hero of Bernstein's (who, not coincidentally, played on the aforementioned Charlie Haden LP), Rudd is known as the father of free jazz trombone. "Roswell was kind of the original inspiration for the band," Bernstein says, who put Sexmob's original weekly gig together as a platform to work on his slide trumpet playing. With Rudd as a starting point, Sexmob developed a wholly original sound. As such, Dime Grind Palace is a pure dilution of that.

"Dime Grind Palace is a further idea of the different things that could happen at a Sexmob gig," Bernstein continues. "If you had come to see us at any point in time in the last year-and-a-half, something you would've heard - or, rather, felt - is on this record." And that's a lot. Across 2002, Sexmob presented entire programs of old waltzes (including "The Blue Danube," which shows up as a hidden room in the Palace), John Barry's James Bond scores (documented on Sexmob's last Ropeadope recording, Sexmob Does Bond), George Harrison tunes, original songs, and nights with special guests like Rudd.

The responsibility for sonically summarizing what Bernstein calls "a year in the life of Sexmob" fell to Bernstein and longtime producer Scott Harding (Medeski Martin and Wood, Wu-tang Clan). And though a grand time in the studio doesn't always equate to a grand time on wax, the pair seem to have discovered the necessary alchemy: a mix of live excitement and sliced, diced, and echoed studioisms. Like Miles Davis's counterpart in producer Teo Macero, Harding is able to translate Bernstein's work onto a spaciously evocative studio canvas. An underground hip-hop star in his own right, his four elegant "Translation" mixes spread across Dime Grind Palace put Harding's architextural prowess at center-stage, just as much as a player as the instrumentalists.

From the boozily braying New Orleans pop of "Baby Let Me Hold Your Hand" to the coyly cubist blowing of "Artie Shaw" to the irreducible self-description of "Blue and Sentimental," it was a busy year for Bernstein and the band, which found them earning well-deserved praise from unlikely quarters and new audiences.

Though Sexmob are undoubtedly a jazz band at heart, their sheer flexibility as musicians has allowed each of them fruitful jobs as working musicians, equally adept in the rock, pop, and commercial worlds (all of which find their way back into Sexmob's sound). For Bernstein, that includes session work (Lou Reed, They Might Be Giants, Linda Ronstadt), film scoring (Robert Altman's Kansas City), and even gigging with a wedding band.

And that's not to mention his work on Diaspora Blues (a recent Tzadik release focusing on the Jewish cantorial music of Moshe Koussevitsky), or a weekly gig with the Millennial Territory Orchestra (a loose knit all-star mini-big band), Scherr's fine solo rock album released on Sonic Youth drummer Steve Shelley's Smells Like Records label, his contributions with Wollesen and others to Norah Jones' Grammy-winning Come Away With Me, and on and on.

If Bernstein's a man happily in demand, then he's in pure bliss when leading Sexmob. His avuncular directorial style was transferred full-on to the three-day session, which concluded with all of the musicians performing together on material they hadn't rehearsed, let alone seen beforehand.

"That's what I'm trying to deal with: musicians communicating with each other when they play. They don't know the songs, so they're listening, and someone plays something that affects the next person, so they're just using their ears and they're reacting and using their reactions to make the performance," Bernstein says.

Whether it's an arrival or departure for Sexmob, Dime Grind Palace surely stands shining as a gemmed milestone in an already storied career, a lustrous home where all are welcome. Show less

"This is Our Music" is Back! Sex Mob, Planet Dream, and Glassband on...

The Sex Mob as Part of a Triple Bill Presented by the Ars Nova...

"It doesn't get earthier than Sexmob...What matters is the fact that it catches the spirit, that infectious yet elusive Sexmob vibe." –Jazz Times

"Sexmob has been straddling the lines between genres for 17 years by incorporating popular tunes into instrumental jazz, and putting the emphasis on beats that move feet. Drummer Kenny Wollesen's funk rhythms, particularly of the New Orleans variety, create a party atmosphere, and Bernstein's visually striking slide trumpet doesn't hurt the hedonistic vibe that Sexmob conveys." –OregonLive.com

"It doesn't get earthier than Sexmob...What matters is the fact that it catches the spirit, that infectious yet elusive Sexmob vibe." –Jazz Times

"Sexmob has been straddling the lines between genres for 17 years by incorporating popular tunes into instrumental jazz, and putting the emphasis on beats that move feet. Drummer Kenny Wollesen's funk rhythms, particularly of the New Orleans variety, create a party atmosphere, and Bernstein's visually striking slide trumpet doesn't hurt the hedonistic vibe that Sexmob conveys." –OregonLive.com

"[That spirit] – one of wailing, riotous abandon mixed with eccentric song choices, high musicianship and healthy doses of funky downtown grit – is on ample display on the group's first live recording, Meets Medeski..." –All About Jazz

"The band Sexmob specializes in a distinct strain of deconstructionist improvised music: jazz that aims at fun by bouncing off the walls." –NPR Music

"...Steven Bernstein's Sexmob have given themselves one task: to make modern jazz fun." –Popmatters 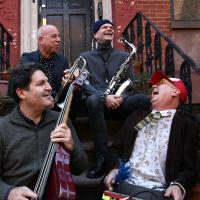 All About Jazz musician pages are maintained by musicians, publicists and trusted members like you. Interested? Tell us why you would like to improve the Sexmob musician page.