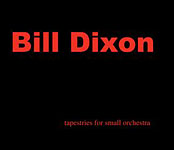 Back in 2007 Firehouse 12 Records announced itself in an audacious declaration of intent with release of Anthony Braxton's 9 CD+DVD box set Nine Compositions 2006. Now in a move of similar ambition the label has gone someway to redressing the imbalance in composer/trumpeter Bill Dixon's recorded output, with this handsome two CD + DVD set which is undoubtedly one of the events of the year. It follows hot on the heels of two other important orchestral works in a 17 Musicians in Search of a Sound: Darfur (Aum Fidelity, 2008) and Exploding Star Orchestra (Thrill Jockey, 2007), but surpasses both through the insight 109 minutes of music and a half hour documentary film affords into Dixon's universe.

No one else is making music like Dixon. In the film he notes approvingly that cellist Glynis Loman has taken a narrow range and worked it to death. The same might be said in a wider context of Dixon himself, wringing infinite variety from exploration of essentially dark brooding soundscapes. Although Dixon has assembled a stellar cast of improvisers, this is ensemble music without spot lit solos. Even in the two small group selections, individuals are sublimated to the overall conception, though Dixon's dramatic spluttering entrance to "Allusions" begs an exception.

Dixon pinpoints the genesis of this project as wanting to show more of the capabilities of the trumpet, something he achieves primarily through his stern conduction. Recorded in luminous sound, all the instruments are clearly separated and spread across the soundstage. With the studio footage, the listener is able to see where each of the trumpeters sits in the sound picture and work out who is playing what; a valuable help with five trumpeters on board. Interestingly what emerges after repeated listening is not just the marvelous but subtly different artistry of the brass men, but also the tremendous contributions from bassist Ken Filiano and cellist Loman. Filiano had not played with Dixon before but jumps right into the core of the action, easily measuring up to illustrious forebears in Dixon groups like Alan Silva, William Parker, and Barry Guy.

As well as the film which features studio footage, interviews with Dixon and group discussion, the DVD includes bonus material showing four complete performances. Illuminatingly these include two takes of "Motorcycle 66," instructive in their differences. Both explore the same mysterious melancholy terrain, with slow moving inexorable layers of sound, though the dynamics vary. Although the alternate take starts as more of an ensemble, it then allows fertile space for each of the trumpeters individually, bar Dixon who conducts but doesn't play. In both there is notated material (though Dixon maintains that even how one enters the studio might be considered notation) but there is clearly flexibility in its placement and delivery.

Each track is a treasure trove of cohesive detail executed to wonderful effect. While full explication is beyond the scope of this review, this is essential listening for anyone interested in the state of contemporary jazz orchestration.