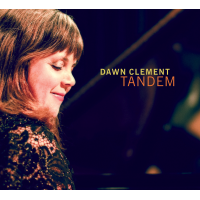 It only takes one listen to Tandem to understand that pianist-vocalist Dawn Clement is a people person with a penchant for trying different things. That openness to various individuals and action points shows itself to be the heart of this collection of duo performances.

Despite being a prominent presence on the Seattle scene, working with high profile leaders like soprano saxophonist Jane Ira Bloom, and having a handful of highly praised albums under her own name, Clement remains a sorely under-recognized artist. Her ability to inhabit many different head spaces, along with the high degree of comfort exhibited while residing in all of them, puts her in a class all her own. Whether playing "in" or "out," tackling a basic blues or exploring wending and winding changes, singing a standard or spinning out a captivating wordless line, she always manages to put her indelible stamp on what she creates.

For this all-too-brief date, Clement called on a few of her closest musical friends and colleagues to join her for some bidirectional banter on a track or two apiece. Some numbers play loose and free while others come across as polished works of art. And each resembles no other. Clement's "Blues For Wayne," with trombonist Julian Priester, opens on fractured lines with pauses before settling into a downhome direction; a trip through Lennie Tristano's "Ablution," tapping into the angular logic and contrapuntal ideals associated with its composer, finds Clement and saxophonist Mark Taylor gleefully crossing lines and finishing each other's thoughts; Thelonious Monk's "Bemsha Swing," with drummer Matt Wilson bringing his serious groove quotient to the party, is playful in its strutting temperament; and Clement's vocal work on standard "My Ideal," with bassist Michael Glynn supporting and soloing in solid fashion, speaks both to her commitment to the art of interpretation and her willingness to stretch. Looking beyond jazz of many stripes, Clement also makes a fine showing in the singer-songwriter realm while sharing space with vocalist/co-producer Johnaye Kendrick on the memorable "Memory."

Nine of the album's ten tracks prove to be about give and take or two-way talk, but Clement does find time to go it alone for one number—"In The Wee Small Hours Of The Morning," with a brighter-than-usual outlook. Rather than wrestle with the song's sorrows in darkness with a drink in hand, Clement looks toward the coming sunrise. It's just one more example of how she manages to find her own way in even the most well-trodden of spots. While there's less than forty minutes worth of music on this one, all of them are worth savoring. Don't lament what's missing. Enjoy what's here.

Blues For Wayne; I Think Of You; Ablution; In The Wee Small Hours Of The Morning; Sugar Cliff; Memory; Improvisation #3; Bemsha Swing; My Ideal; Stay Awake.