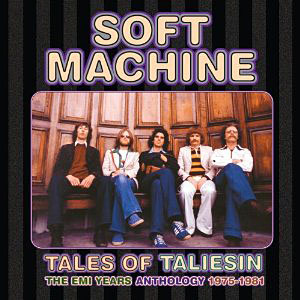 With the release of Bundles (Harvest, 1975), Soft Machine moved more definitively into the riff-based fusion territory that keyboardist/reed man Karl Jenkins had begun pushing the band since his arrival on Six (Sony, 1973). With reeds becoming increasingly less dominant, and the group's only remaining founding member, keyboardist Mike Ratledge, relegated to a backline position, this incarnation—distanced completely from the minimalist-informed, free jazz-centric, but still high volume and rock-edged classic quartet that recorded albums like the seminal Third (Sony, 1970)—truly felt like a completely different band.

But if there was any period of this now-legendary British group's history that had a certain element of consistency (in approach, if not lineup) it was the final, fusion years from 1975-1981, when the group went out with a whimper on Land of Cockayne (Harvest, 1981)—originally a Jenkins solo album but reclassified as Softs for reasons more marketing than artistic. Tales of Taliesin: The EMI Years Anthology 1975-1981 collects material from the group's final four albums, also including 1976's Softs and 1978's Alive & Well: Recorded in Paris, and if there's no bonus material to entice completists who have already picked up Esoteric's fine remasters, it's certainly a well-chosen entry point.

The disc does contain bonus material released on Esoteric's double-disc expansion of Alive & Well—the funky 10/4 "K's Riff" and gently lyrical "Song of Aeolus," whose inclusion here is curious as it's not necessarily better than the original studio version on Softs—but other than that it's all material from the original releases, though Mark Powell's remastering of the EMI/Harvest-era Soft Machine is, without a doubt, definitive. The anthology also includes Jenkins' contentious, Giorgio Moroder-informed piece of techno-fluff, "Soft Space," which closed the original, single-disc Alive and Well on an equally curious note for those who believed it to be Softs' swan song.

On the plus side, Tales of Taliesin includes one of jazz-rock's defining moments: guitarist Allan Holdsworths six-minute solo on Bundles' "Hazard Profile." A marvel of extended construction, it's not Holdsworth's first major recorded moment—that would be his equally mind-blowing solo on "Hector's House," from trumpeter Ian Carr's Belladonna (Vertigo, 1972)—but it's a remarkable, breathtaking combination of occasional economies and viscerally choked off notes, peppered amidst furious cascades of notes that show Holdsworth's touchstones to be more saxophone than guitar, specifically John Coltrane's renowned "sheets of sound."

Holdsworth's replacement, John Etheridge, is also well-represented, especially on "The Tale of Taliesin," where he proves himself equally capable of blinding speed and unmistakable lyricism. There are other soloists amongst this two-hour collection, but the truth is that latter-day Soft Machine—with Ratledge bowing out after Bundles (barring a brief guest appearance on Softs)—was Karl Jenkins' band, compositionally speaking, but guitar was its defining voice, along with drummer John Marshall's relentless energy and groove. Tales of Taliesin: The EMI Years Anthology 1975-1981 may not offer anything new for Soft Machine completists, but it's the perfect entry point for those who either dismissed post-classic lineup Softs or are new to the group altogether, and like their fusion filled with knotty time signatures, anthemic riffs and muscular guitar pyrotechnics.