By Dan McClenaghan
February 1, 2017
Sign in to view read count 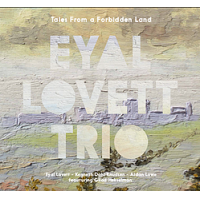 It takes a high level of confidence to offer up a two CD set on a sophomore outing. Most artists wait for later in their careers for for this particular audaciousness. But Berlin-based pianist Eyal Lovett, originally from Israel, follows up his debut, Let Go (Self-Produced, 2013), with double CD offering Tales From A Forbidden Land.

He has a lot to say, with his music with it's Middle-Eastern tinge, influenced it seems by the sounds of Brad Brad Mehldau and Bill Evans. It a dynamic trio offering, with guitarist Gilad Hekselman sitting in on several cuts, with a guitar/piano interleaving as good it gets. Hekselman's notes have a resonance that a times sounds "pianistic," and Lovett's piano has a way of sounding guitar-esque, in a way that takes the attention away from individual inputs, shifting the focus to the the pure sound of the music.

Much of the music references Lovett's homeland, with nostalgia, longing, mystery. There are lovely, piquant ruminations, intimate, nuanced conversations. There is hope; there is disappointment. Lovett pens delicate, achingly beautiful melodies, and he includes some well-chosen covers—a handful of Israeli songs and the familiar "Days Of Wine And Roses," a tune he partly disassembles, in a bit of a Hal Galper mode, creating a idiosyncratic (but beautiful) take on the tune.

It's a lot of music Eyal Lovett is offering up on Tales From A Forbidden Land. It's cohesive statement that holds together from start to finish. The pianist/tunesmith/arranger is well-justified in his confidence at sending a double CD set out into the world.

CD 1: The Days Of Wine And Roses; Autumn Song; Entry Point; Japanese Tale; Odelya; Forbidden; Hope Without Borders. CD 2: Bitter Sweet; A Song For A Forbidden Land; Little Ones; A Promised Land; Something Begins, Something Ends; I Have No Other Land.