By JOHN KELMAN
September 5, 2010
Sign in to view read count 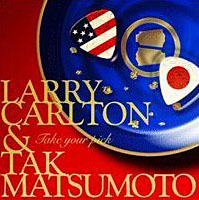 It's a shame that artists' careers are reduced to oversimplifications of who they are and what they're capable of. Guitarist Larry Carlton, for example—despite releasing kick-ass blues-centric records like Sapphire Blue (Bluebird, 2004) and, more recently, the exciting yet unfailingly tasty Live in Tokyo (335 Records, 2007), not to mention delivering iconic solos on Steely Dan albums like The Royal Scam (MCA, 1976) and Gaucho (MCA, 1980)—is, more often than not, associated with the smooth jazz of albums like Alone/But Never Alone (MCA, 1986). Not that there's necessarily anything wrong with that, especially when it's real players playing music that's easy on the ears but has its own set of challenges, but it's too easy to forget that Carlton can play through changes with the best of them, as his still-stunning bop-centric solo on "Mulberry Street," from Strikes Twice (MCA, 1981), amply proved nearly thirty years ago.

If Carlton can be criticized of anything, it's his emphatic lyricism and unfailing taste, though it seems incredulous that the words "too" and "melodic" could ever be used together in the same sentence. Take Your Pick teams the veteran session man and, yes, smooth jazz hit maker with Japan's Tak Matsumoto—guitarist for B'z and, with over 80 million albums sold in his country alone, no less an icon, at least in some parts of the world. Carlton's name may come first, but this is a truly collaborative effort, with the two guitarists splitting the writing and arranging duties right down the middle; Matsumoto even arranges two of his tunes for a Japanese horn section, while Carlton brings in some American ringers to spice up three of his tunes. But regardless of where the music was recorded—from Franklin and Nashville to Los Angeles and Tokyo—the core rhythm section of drummer Billy Kilson (Dave Holland, Chris Botti), bassist Michael Rhodes ((J.J. Cale, Aaron Neville, and keyboardist Jeff Babko (Sheryl Crowe}}, James Taylor Quartet) keeps things honest on a set that leans towards a lighter complexion, though between Carlton and Matsumoto, there's plenty of grit to give the music some edge and energy.

Carlton's sweeter tone, recognizable vibrato and slightly broader language makes him easily distinguishable from the largely fuzzier-toned and rockier Matsumoto, especially on tracks like the Japanese guitarist's opening "JAZZY BULLETS," a finger-snapping tune with some tasty twin-guitar melodies and ass-kicking solos. But Matsumoto proves capable of a cleaner tone and twangier disposition on "Nite Crawler 2010"—an update on Carlton's self-titled 1978 MCA debut—and the similarly light funk of the Japanese axe-slinger's "THE WAY WE WERE."

Surprisingly, the more oriental-sounding references come on Carlton tracks like "Islands of Japan," with its koto samples. The lighter disposition at the start of the disc kicks into higher gear on Carlton's rocking, horn-driven "Easy Mystery," and the greasy funk of Matsumoto's closing "A girl from China." Throughout, Carlton may navigate the changes with a little more finesse, but he's well-matched, in tone and feel, with Matsumoto, making the easygoing but undeniably satisfying Take Your Pick less a matter of "either/or" and more a case of "and."