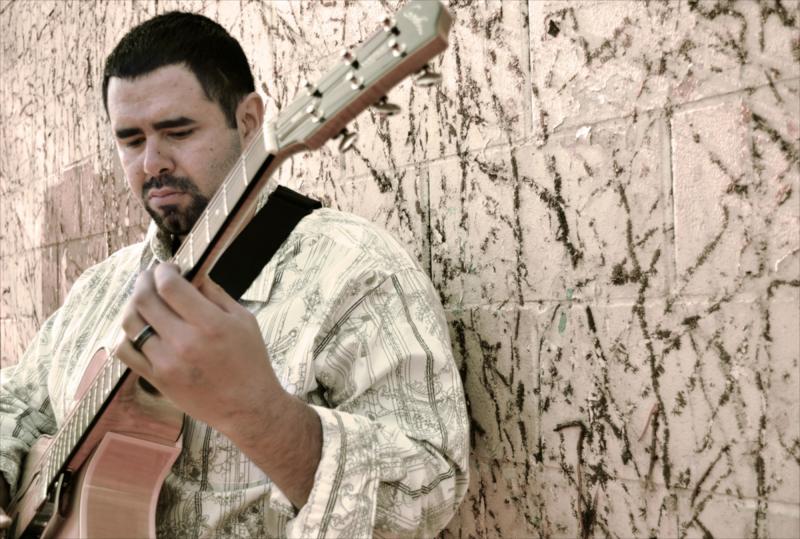 By MASON RAZAVI
September 13, 2014
Sign in to view read count
Meet Mason Razavi:
Starting out as a self-taught rock guitarist, Mason began studying jazz and playing in working rock bands as a teenager. After hearing an Andres Segovia recording for the first time at age 22, Mason changed directions dramatically and focused on the classical guitar for several years before returning to jazz and the electric guitar. Though first and foremost a jazz guitarist/composer, his diverse background has led him to play in settings ranging from rock bands to accompanying concert choirs, backing up jazz singers, and as a classical soloist.

Mason has studied guitar and composition with Tuck Andress, Mimi Fox, John Stowell, Corey Christiansen, Rick Vandivier, Aaron Lington and others. He holds a M.A. in Jazz Studies from San Jose State University and a B.M. from the Berklee College of Music where he studied jazz composition and majored in Contemporary Writing and Production.

Teachers and/or influences?
I've had the opportunity to study composition, arranging, and guitar with many wonderful artists including Mimi Fox, Rick Vandivier, Jon Damian, Aaron Lington, Ken Pullig, and many others.

Despite that, I consider myself largely self-taught as a guitarist. I began in earnest by learning songs off the radio by ear and by guitar tab and years would pass before my first formal private lesson. When I got heavily into classical guitar, I again went back to teaching myself the fundamentals and worked on getting it together before seeking out a great teacher. Self-study and discovery is what it's all about for me.

I knew I wanted to be a musician when...
I couldn't stop thinking about the guitar even before I ever had one. For some reason the instrument really speaks to me. Looking back on it now, it was obvious that as soon as I started playing at 14 years old that I was in it for life; the decision to make it my livelihood came a little later, but I think I always knew that this is what I'd be doing.

Your sound and approach to music:
I strive to make music that is both "heady" and accessible -that is to say music that is deep, substantial, and rewarding yet listenable.

Musicians have the ability to uplift people and to remove the dust and cobwebs of daily life from people's souls. Although every musician wants the approval of their peers and idols, the most important thing to me is to connect with an audience and deliver a substantial musical experience every time there is an opportunity to do so.

Your teaching approach:
No matter if you're working with beginners or advancing students, teaching is a high art. Let's start with that and acknowledge that teaching is a separate skill altogether from playing and writing.

Teaching music and getting to see that "light bulb" come on for a student is one of life's great joys. This is true no matter what the age or level of the student or what it is they're working on.

Ultimately, I strive to develop students that have a strong foundation and who will go on to become lifelong learners.

Your dream band:
I'm not sure of a dream band, but I can think of guitarists I'd love to work with. I think a duet gig with Bill Frisell would be an enlightening engagement. A concert with Gene Bertoncini both with our nylon string guitars would be a special moment for me as well.

Road story: Your best or worst experience:
My first ever public performance was something else! I was in a rock band, or rather a few friends and I fancied ourselves a rock band. We went and played a battle of the bands at a high school with no rehearsal and a sort-of-a-kind-of-a-set list. I was 14 or 15 years old and had been playing guitar for about 6 months. At the time we only owned 10-watt practice amps that could barely fill a bedroom, so one of the other bands graciously let us use their gear. Of course we were terrible. Thankfully it was an outdoor event so we didn't have everyone's full attention as they were more pre-occupied with the dunk tank and getting to take a sledge hammer to a car for $1 per swing (seriously).

Suffice it to say it was a total disaster, but now I can certainly laugh and chalk it up to a learning experience!

Favorite venue:
I really enjoy performing at the Theater on San Pedro Square in downtown San Jose. It's a small theater that is hidden away upstairs above some taverns and restaurants in the heart of downtown. Something about it has an East Coast vibe to me, like it's a small theater in NYC or something. It's an intimate setting that's enjoyable for the artists and the audience.

Your favorite recording in your discography and why?
I'm very proud of "Quartet Plus," which is about to come out this September. This album has music I've written over the past 10 years and features a cast of fantastic players.

I've tended to jump around between different styles and musical interests, and I think this album reflects some of that while also being a first attempt and putting my many influences together as a unified voice.

While I am content with my performance, I'm most proud of the compositions and arrangements. I think of myself as a composer first and I'm putting my best foot forward with this release.

The first Jazz album I bought was:
I can't remember, but I remember hearing cuts from Bright Size Life (ECM,1976) by Pat Metheny in high school jazz band and being floored.

What do you think is the most important thing you are contributing musically?
I had been looking for records by guitarists who also write extensive compositions and arrangements or incorporate classical guitar technique into their playing. After a while I realized I was waiting to hear my own record that hadn't been recorded yet. I don't consider myself the best at any one thing other than that I have a unique voice as an artist.

Did you know...
I'm a huge hockey fan. I played roller hockey growing up and plays men's league ice hockey now. I'm a die-hard San Jose Sharks fan and am always happy to talk about the Sharks or the NHL in general.

What are some of the essential requirements to keep jazz alive and growing?
Innovation, education, outreach, and an open mind.

What is in the near future?
I'm beyond excited to be sharing my album Quartet Plus, which will be available in September. Right now I'm preparing for the album pre-release show and getting ready for engagements with San Jose Jazz and others.

What song would you like played at your funeral?
I don't know, but I hope they keep it short and serve good food!

If I weren't a jazz musician, I would be a:
Teacher, or maybe a psychologist.