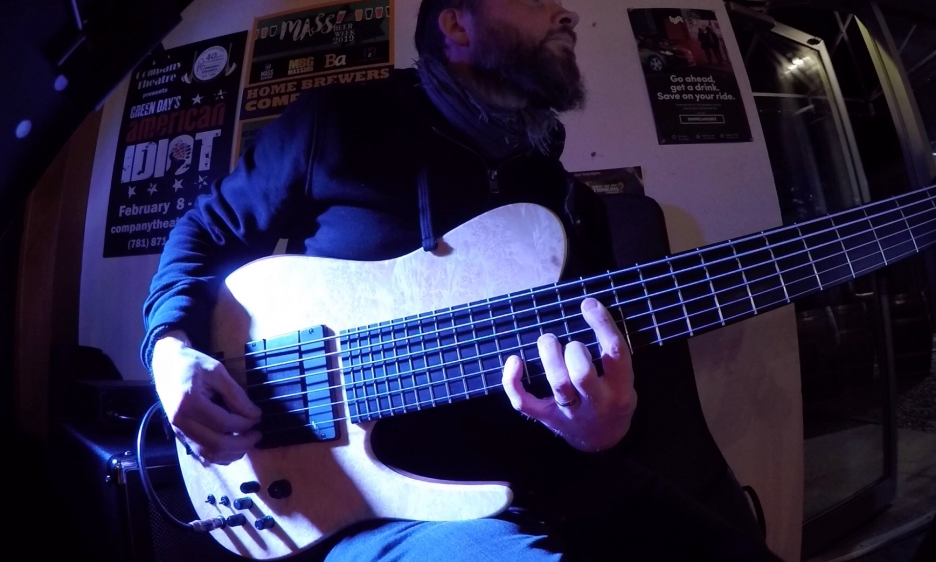 "The pieces flirt with film score landscapes and world music, while being grounded in jazz with distinct R&B groove sensibility that aims ever skyward and beyond. Groove For Peace is an absolutely full spectrum outing!" &#151Brent Anthony-Johnson, Bass Frontiers Magazine

Meet Tim Paul Weiner:
Tim Paul Weiner is a freelance bassist, songwriter, and composer living in Boston, MA. His early musical career was spent between Los Angeles and the Midwest before moving to the east coast in 2000. He is a Fodera artist and a Berklee College of Music Film Scoring graduate. He received his Master's degree in Modern American Music from the Longy School of Music of Bard College, where he most recently studied jazz bass with John Lockwood, classical bass with Pascale Delache-Feldman, free music with Joe Morris, and improvisation with Peter Cassino.

Weiner's first release as a leader with his group, Evoke Ensemble, is Groove for Peace (Self Produced, 2012). The album is a collection of his original music and is an eclectic, bass-driven musical hybrid steeped in groove and improvisation, inspired by jazz, influenced by film, with flavors running the full musical spectrum from world music to classical and beyond. Bass Frontiers magazine called it "a much needed and very cool release! ... The pieces flirt with film score landscapes and world music, while being grounded in jazz with distinct R&B groove sensibility that aims ever skyward and beyond. Groove For Peace is an absolutely full spectrum outing."

Tim Paul performs in many eclectic ensembles as an electric and double bassist focusing on styles including North African Chaabi, funk, world music, jazz, and more; he also performs and records with many songwriters in the area. He is the house bassist for two churches on Boston's south shore.

In February 2013, he premiered a solo piece for 5-string electric bass, Edgar Varese's "Arcana Variations" (with variations by Dr. Peter Evans of the Evans-Anti-Art-Ensemble), at the prestigious Longy School of Music's Pickman Hall in Cambridge, MA.

I knew I wanted to be a musician when...
My older brother—who is a musician—heard me playing piano by ear and gave me a guitar for my birthday, with the caveat of hearing what I could do after a month or so. I ended up transcribing bass lines by ear, and didn't even realize I was only hearing the bass until he told me!

Your teaching approach:
Making a positive difference in someone's life is one of the greatest gifts that one can give. Some of the greatest gifts in my life were lessons learned from my first music teacher, to my professors in grad school, from my grandfather's wisdom to my two young children teaching me about patience. I'm a lifelong student and voracious learner and this is something I want to be able to pass on to my students-a love and thrill for learning.

Some of my favorite players I was friends with and got to play with at school, are the guys killing the scene today: Mauricio Zottarelli, Misha Tarasov, Chris Ward, Nir Felder, Tony Grey, Steve Jenkins, Oli Rockberger, and Romain Collin.

Favorite venue:
My favorite venue is the Regattabar in Cambridge. The vibe isn't as great as some other clubs in town, but the prestige and the openness of the club makes up for it. The stage is the same level as the audience, and although it can be claustrophobic, literally rubbing elbows with them, they are your fans, and I dig that. Also, the sound guys are totally pro and in my experience, treat the musicians respectfully, and vice-versa. The club treats the band to dinner at one of the well-known restaurants within the hotel before the gig and if you ask, they give you a small, but appreciated parking validation. Not to mention, I'm sharing the same stage as most of my heroes in the jazz community.

Your favorite recording in your discography and why?
My most favorite recording has to be Miles Davis' Kind of Blue (Columbia, 1959). My musical tastes have changed so much over the years and my style and approach to music is always changing, but after listening to and appreciating all the great up-and-coming players' technical prowess, or composing chops, and after listening to all the amazing technology that advances our craft, this album brings me back to square one. It's the organicness, simplicity, vibe, tunes, players, and the history.p>

The first Jazz album I bought was:
When I first started playing bass, I played in my high school jazz band. I didn't know much about jazz, but the jazz band needed a bassist, and I had a pulse. So there I was, stumbling through chord changes, walking, improvising, reading (or not reading) and it was almost a disaster. But it was just not enough of a disaster to make it magical. Anyhow, one of my jazz band friends told me if I was going to play jazz bass, I should check out Jaco Pastorius. I had never heard of Jaco, so I went and bought the album and gave it a listen.

I thought my friend was joking with me because at the time, my ears, head, and hands couldn't comprehend what I was hearing. I didn't get it. And it took years for me to comprehend what was actually happening in "Donna Lee," but that was the first jazz album I sought out and bought.

Did you know...
My whole life, I've been a fiercely creative person. After high school I was discouraged to pursue music and ended up getting a scholarship to a prestigious art school, which I attended, but dropped out to play music. Following that creative rhizome I soon realized that I have an epicurean alter ego, and this other passion allowed me to support myself while making music for a long time. I spent many years working in kitchens and before deciding to go to back to school to seriously study music, I almost opened a restaurant.