Formed in 2007, Waxwing is a co-led group created by three veterans of the Vancouver music scene: Tony Wilson on guitar, Peggy Lee on cello and Jon Bentley on saxophones. The trio has released three studio recordings featuring their original compositions: "Flicker Down" (2021 Songlines Recordings) , "A Bowl Of Sixty Taxidermists" (2015 - Songlines Recordings), and "Escondido Dreams" (2007 - Drip Audio). The recipient of numerous Canada Council Grants, Waxwing has performed their unique works in concerts across Canada and has been a regular favourite in the Vancouver International Jazz Festival 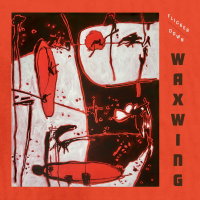 'Flicker Down,' New Release From Modern Chamber Jazz Trio Waxwing, Available On May 21

Jon Bentley is a Juno nominated saxophonist based in Vancouver, Canada. A versatile musician, Jon performs and records in many genres of music both as a leader and a sideman. He has recorded and/or performed professionally in concerts with musicians/ groups such as Kenny Wheeler, Seamus Blake, Dave Douglas, Mark Helias, Brad Turner, Denzal Sinclaire, Eddie Daniels, Oliver Lake, Vancouver Symphony Orchestra, Phil Dwyer's Saxophone Summit, The Temptations, Peggy Lee Band, Neil Swainson, and Metalwood. Aside from his participation in many recording projects as a sideman, Bentley has released two albums as a leader: "Jon Bentley Quintet: Motions" and "Diversions: American Prophecy." As a co-leader, Jon has released: "UGETSU: Live at the Cellar", "Wilson/Lee/Bentley: Escondido Dreams", and "Waxwing: A Bowl Of Sixty Taxidermists"

A Bowl Of Sixty Taxidermists

Waxwing: A Bowl Of Sixty Taxidermists

The second album from this Vancouver-based trio--originally going by Wilson/Lee/Bentley, now known as Waxwing--is a study in contrasts. Idiosyncratic miniatures sit shoulder to shoulder with statements of serenity, eerie constructs and macabre scenarios are quickly replaced with comforting sounds, and uncertainty peaks around every corner. But there's a distinctive group sound and aesthetic here that transcends ...