Results for "Time And Time Again" 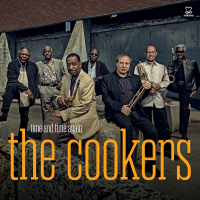 Celebrating seven years together, Time and Time Again is the fourth release by The Cookers since the group's recording debut, Warriors (Jazz Legacy Productions, 2010). The band's all-star lineup, who first rose to prominence in the late '60s and early '70s, was initially formed by trumpet player David Weiss, who also serves as musical director. In ...

The Cookers: Time And Time Again

The very idea of The Cookers is something of a pleasing paradox. It's a band that's populated by some of the most impressive and seasoned veterans out there, but it plays like an anti-super group; it's a real deal band, not a big payday or business venture, and nobody's phoning it in, grandstanding, or letting any ...

There's always magic in the air whenever Paul Motian, Bill Frisell and Joe Lovano get together and this album is no exception. A sequel to the brilliant I Have the Room Above Her (ECM, 2005), this is another master painting by these fine artists. Jazz has always favored individual voices and expressionism, and these players have ...

The word abstract, when applied to jazz or music in general, is that which has little or none of the components that provide the mind, through the ears, structure and form through repetition. Most would agree that rhythm is the most basic in that the repetition of groups of beats and the accents ...