Thurman Barker began his professional career at the young age of 16 playing for blues singer/guitarist Might Joe Young. Classically trained at the American Conservatory of Music his reputation as a drummer grew quickly. He has played for Billy Eckstein, MarvinGaye, Bette Midler and Vicki Carr. He was the house drummer at the Schubert Theatre in Chicago for 10 years where he played for national touring companies. Barker is a charter member of the Association for the Advancement of Creative Musicians, (AACM) an organization with which he continues his association to this day. He has recorded with Cecil Taylor, MuhalRichard Abrams, Amina Claudine Meyers, Anthony Braxton, Roscoe Mitchell, Sam Rivers, Billy Bang, Joseph Jarman, and Henry Threadgill. Barker has produced five recordings under his own record label, Uptee Productions

With the fourth issue in its Sam Rivers archival series, the NoBusiness imprint has unearthed a cracking concert recording of a terrific quartet, completed by bassist Dave Holland, drummer Thurman Barker and tubaist Joe Daley. Very few can match Rivers' breadth of experience, which includes not only with leading lights of the 1960s New Thing like ... 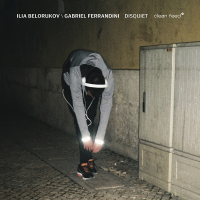 "Energetic" may not be a strong enough word to describe this fascinating collaboration between Russian saxophonist Ilia Belorukov and American drummer Gabriel Ferrandini. Like the near-infinite splatter-patterns of a Pollack painting, the two drip, drop, slam, stutter and explode across the musical canvas of their album Disquiet, with a sense of urgency that brings to mind ...

For this new installment of our “From the Archive" series, we present an excerpt from the concert by the Sam Rivers Quartet hosted by Centro d'Arte in 1978 in Padua, Italy. The quartet featured some of the finest musicians operating in the creative scene of the '70s, with Sam Rivers on saxophone, Dave Holland on double ...

The city of Seattle has an eclectic relationship with jazz historically, in terms of innovation and embracing the notion of music without boundaries, of musical communities interacting and supporting each other. Samantha Boshnack fits perfectly into that musical paradigm. Whether writing and performing with her 14 piece ensemble B'shnorkestra, or in a quintet setting, Boshnack has ...

Today, let's look at some videos of drummer, percussionist, and composer Thurman Barker, who's coming to St. Louis to play two events in early April at Washington University. He'll perform first in a ticketed concert for the Jazz at Holmes series on Thursday, April 7, followed the next evening by a free event, improvising to silent ...