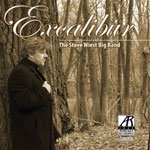 Even though the odds are heavily against them, a handful of intrepid souls keeps struggling to safeguard the big band tradition, and a few of them even achieve a certain measure of success. Let's hope that trombonist Steve Wiest is among the modest group of winners, as his debut album, Excalibur, certainly bears repeating--not literally, of ...