Rich Lamb has been playing fretless, 4 string, 5 string electric basses and the upright bass professionally for 34 years. He co-founded the turn of the 80's jazz fusion band "Dry Jack" and gained worldwide recognition with his brother, pianist Chuck Lamb, which was listed as part of the new wave of fusion in Rolling Stone Magazine's History of Rock `n' Roll. With Dry Jack (completed by guitarist Rod Fleeman and drummer Jon Margolis) he performed with legendary vocalist Eddie Jefferson and avant garde sax beatnik Richie Cole and opened shows for Pat Metheny, The Dixie Dreggs, Gino Vinelli, Freddie Hubbard and McCoy Tyner among many others 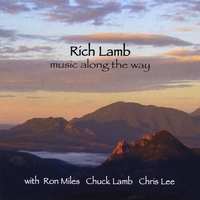 All About Jazz features a free song every day spanning all genres of jazz, and of the 30 tracks featured in July, these ten represent our personal favorites. We also included the top ten reader favorites as indicated by total downloads. Musicians and record labels can submit full length MP3s for consideration here. Enjoy! EDITOR'S PICKS ...

Music ALong The Way