"Justin "Justefan" Thomas was born in Baltimore, Maryland. He started out on piano, violin, and steeldrums at the age of 6. He was introduced to the vibraphone at the age of 8 by Mr. Wendell Hairston. Soon after, Justin has made two appearances on the nationally televised show, Showtime at the Apollo, achieving 2nd place in their final competition. He graduated from Baltimore School for Arts (BSA) where he studied with Mr. John Locke, percussionist of the Baltimore Synphony Orchestra. He moved to Chicago and received his B.M. in Jazz Studies at DePaul University. Justin has shared the stage with many artists such as: Lionel Hampton, Hank Jones, Cyrus Chestnut, Max Roach, and Wynton Marsalis and the Lincoln Jazz Orchestra

The Prelude: An EP 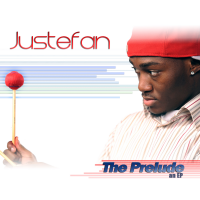