Live at the Cheshire Cat 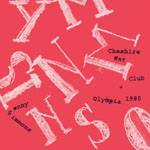 In 1980, legendary altoist Sonny Simmons was at his lowest point. Describing himself as “shipwrecked when the gigs dried up and the money ran out, Simmons followed his wife and frequent collaborator, trumpeter Barbara Donald, from San Francisco to Olympia, Washington, with the hope that the change of scene would revitalize their tenuous marriage and put ...