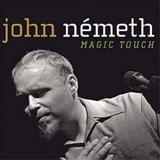 John Nemeth's debut CD for the Blind Pig label, Magic Touch, reinforces what the people of the Pacific Northwest have known for years: as an emerging young artist, he is someone to watch. On twelve stellar tracks, only three of which are covers, the singer/harmonicist demonstrates beyond doubt that he has the chops to command attention ...

Label: Blind Pig Records
Released: 2000
Track listing: Look What You Do To Me; Confused; Soft Place To Fall; Don't Lie To Me; If You Love Me Like You Say; Another Hoping Fool; I'm A Woman; So Damn Easy; Nothin' To Do With Love; What Goes Around; The Day It Comes. (Total Time: 45:24)

Live at the Fillmore

King Of The Highway

By Jimmy Thackery and the Drivers