By Karl Ackermann
October 31, 2014
Sign in to view read count 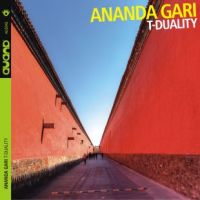 The young Italian drummer Ananda Gari has been solidifying his credentials in some prestigious company. As part of the quartet Fool Circle, he recorded Moving Thoughts (Rai Trade—Videoradio, 2011) with pianist Stefano Battaglia. With his brother, pianist Govinda Gari, he recorded Incipit (Goodfellas, 2013) featuring saxophonist Mark Turner. On T-Duality—his first outing as a leader—Gari has surrounded himself with a cadre of downtown New York notables whose disregard of convention pushes his capabilities as both composer and drummer.

There's a pattern in the first two tracks as they open and close in comparatively subdued fashion, bookending intense eruptions. A bit of symmetry between Berne and Abbasi opens "Trucks" but it very quickly gives way to a familiar and mercurial Berne outburst. The frenetic eruption however, doesn't portent the overall demeanor of the piece or the collection as a whole. Gari's work is cut out for him from the start as he deftly weaves through rapid fire time changes and free improvisation. "Never Late" begins with Gari's march-like pacing and a Formanek's solemn bowed bass and Abbasi offering complimentary single notes. Abbasi then goes free-form and the tempo gets feverish.

"Are You Kidding Me" features the hint of an abstracted Middle-Eastern theme though Berne and Gari quickly reset the piece to focus primarily on the abstractions. Berne again goes for the outer limits of his alto, swapping out improvisations with Abbasi, the two occasionally coming together, slowing the pace and then reigniting it. Working as a duo for several minutes, they elevate the pace and the level of tension making this one of the more interesting pieces in the collection. Not all the pieces on T-Duality follow a volatile configuration; "Fields" is unforced—almost leisurely—in its pace. Formenak plays in a rich low register with Berne contributing long fluid lines, a reminder of his more melodic capabilities.

Gari—who toured Italy with Abbasi—shares with him a fondness for Indian music, an influence on Gari as a composer. With T-Duality he strikes a balance among ethnic inspiration, free jazz and modern composition. The musicians react to each other emphatically and Gari demonstrates his ability to be strikingly musical with the drum kit while skillfully driving and directing the complex pieces. T-Duality is an ambitious and interesting first outing for Gari as a leader.