By Karl Ackermann
December 14, 2016
Sign in to view read count 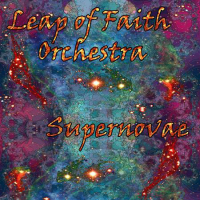 Composer and multi-instrumentalist, PEK, set his sights on something bigger with the Leap of Faith Orchestra's Supernovae. The previous incarnation of the LOFO expands from the fifteen musicians on The Expanding Universe (Evil Clown, 2016) to twenty-one players on this new outing. Another noteworthy element of this project is PEK's use of Frame Notation where the score is seen in written descriptions and straight-forward symbols within Duration Bars. The system provides the musicians with immediate understanding of their own parts and the higher-level arrangement of the music.

Supernovae consists of a single track composition running just under eighty minutes. The digital download includes a bonus track. Though the extended piece is not broken out by formal movements, there are clear delineations within the score. PEK's ensemble—not surprisingly—includes enough non-traditional and weird instruments to compete with a Dr. Seuss orchestra. Though they are not playing in a vacuum, that group of instruments dominates the first ten minutes before strings and reeds make themselves more clearly heard. Forty-five minutes in, we have the first case of prolonged melody, darker and more subdued than the overall tone of the first half.

Supernovae gives way to free improvisation overlaying the melody. Eventually the piece introduces a brilliant percussion passage before it reintroduces the non-traditional music elements, but here in a more refined manner. As with all of PEK's compositions, there is—behind the scenes—a painstaking amount of organization that is not always evident in the listening. That is part of the beauty of this album; the non-traditional approach to instrumentation and the lack of adherence to Western structure continue to make the various iterations of Leap of Faith consistently interesting. And interesting look at the written score can be viewed at http://www.evilclown.rocks/lofo-supernovae-score.html.