By KARL ACKERMANN
February 21, 2018
Sign in to view read count 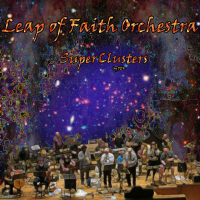 On two occasions each year, composer and multi-instrumentalist PEK (David M. Peck), gathers together his Evil Clown collective for live recordings. Culled from Leap of Faith, String Theory, Mekaniks, Metal Chaos Ensemble and their respective off-shoots of each, the players form his massive, eighteen-member Leap of Faith Orchestra. For the SuperClusters session, the group assembled at Longy School of Music at Bard College with a specially written score that takes advantage of the individual sub-groups' previous experiences.

As LOFO had done with their Supernovae (2016) and Possible Universes (2017), SuperClusters entails a single title track composition, here running seventy-six minutes. PEK continues the use of his Frame Notation technique where the score is seen in written descriptions and archetypal symbols within duration bars. The system provides the musicians with instantaneous grasp of their individual performances and an overview of the total piece. Over the course of these large group performances, PEK has tinkered with the technicalities of the process but not the prevailing principle. The piece, though structured by group sections and intervals, is improvised within those parameters.

There are some of the usual array of unconventional "instruments" that PEK favors, such as rachets and flex-a-tones, but in an ensemble of this size, even the most peculiar of them are absorbed into the larger sound. There are few conventional elements in the structure of the composition; melodies are passing shimmers of invention and solos are the exception rather than the rule. Still, there are episodic instances where players and sections stand out -four minutes in, a swirl of brass and horns fills the soundscape, dissipating as quickly as it had formed. At thirteen minutes, Dave Harris' tuba takes the entire orchestra to a point of near silence that breaks out into a succession of subdivision passages. Among them, is an absorbing percussion solo from Joe Hartigan.

PEK points out, in his album notes, "The performances by these smaller ensembles (those mentioned above) stand by themselves as improvisation performances as well as getting us ready to improvise in a full orchestra setting." SuperClusters appeals on at least two levels; the technical aspects of PEK's approach are intriguing and though provoking. From a musical perspective those techniques translate to a listening experience that seems to change with each successive play of the disc. The digital download of SuperClusters includes a twenty-minute bonus track featuring the smaller Leap of Faith group.