Frank Enea & The Crooked Hearts: Sunshine In My Head 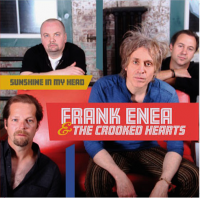 Frank Enea's musical resume is deep in diversity and carries some experiences that are definitely out the mainstream. His Makeshift Days (VisionX Records, 2003) was squarely oriented in rock while Hellbound Blues (ACM, 2006) was a solo guitar outing, and true to its title. But the work that Enea is best known for, exists in a two-dimensional world. "Teen Titans Go!" is an animated Cartoon Network show that is in its fifth season, drawing some big-name actors to guest appearances and spawning a theatrical movie. In its mix is a fictional band called B.E.R., a trio that includes Enea (who also voices his character) and he co-wrote "The Night Begins To Shine" for the show. The song charted in the top twenty-five on Billboard, and at Number 1 on the iTunes rock music charts, and was covered by Fall Out Boy and CeeLo Green. Enea's music has also been featured on television programs on NBC, Showtime, FOX and Discovery Channel. His new album is Sunshine In My Head and features his group The Crooked Hearts.

Enea, well-known as a guitar and bass instructor, operates Satellite Music Studios, a recording facility located just north of Manhattan. On Sunshine In My Head he plays both instruments (but primarily guitar) and supplies the vocals. Drummer Martin Stroh has been featured on recordings that cover pop, rock, folk and electronic and teaches music. Pianist/organist Brian Newsholme doubles as a music instructor as well. Alex Vorozhbitskiy (aka Alex V) is the quartet's bassist.

The album opens with the title track and the hook is in from the start with shimmering harmonies, radiant guitar, and a firm backbeat from Stroh. "Get Me a Rise" and "Summer Sun" are down-to-earth rockers with a commendable lack of posturing. Enea's affinity for blues-flavored rock shines through in the infectious "Hide Away" and "Nothing Comes Easy" while there is a tinge of British psychedelic pop in "Elevate." The closing ballad "No Worse For Wear" features a scorching guitar solo from Enea.

Stroh, Vorozhbitskiy and Newsholme—now on their third release with Enea—offer more than background support; their musicianship, while often restrained, provides a roundness to the sound. The quartet has shared the stage with Smash Mouth, Soul Asylum, The Bacon Brothers, Jakob Dylan and other top-tier acts. Enea himself, is perfectly capable of going "guitar hero" if he chooses, but he adheres to an appealing collective mentality. There are moments where The Crooked Hearts may reflect a favorite bar band, and others that have a trace of The Beatles. Sunshine In My Head is good fun and good music. Put your shades on.

Sunshine In My Head; Get Me a Rise; Hide Away; Summer Sun; Elevate; Nothing Comes Easy; No Worse For Wear.