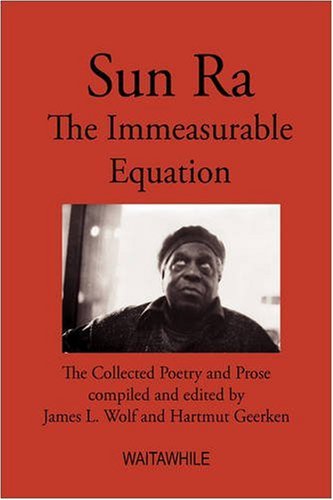 Sun Ra: The Immeasurable Equation
The Collected Poetry and Prose

"In his poems, as much as his music, Sun Ra seemed to want to undo and rewrite every concept he could get his hands on. The words of co-editor and Library of Congress member James L. Wolf (the co-editor being German writer/ percussionist Hartmut Geerken) show his fascination of Ra's utopian writings. Astrologically, allegorically, historically, linguistically, mathematically, mythologically, phonetically, prophetically, rhythmically, transcendentally and poetically - there was only one Sun Ra and this fantastic and fascinating collection provides a necessary documentation. Wolf's observation that Sun Ra (who died in '93) uses fewer concrete nouns than any other poet he's aware of is intriguing. Abstractions of the English language such as Ra's saying, "His story is history, by my story is mystery captures the imagination and reality Ra lived 24-7.

The first 55 pages of 530 are dedicated to various introductions and essays discussing Sun Ra's unique thought process, from his music to his usage of words as symbols, equations and constellations. "In his texts, he makes use of words in the same way as a medicine man makes use of his herbs and a chemist his chemicals, reveals essayist Sigrid Hauff. Ra's written vignettes, many 50 words and sometimes less, are like quick awakening jabs to the common yet oblivious numbness of human existence and our so-called "civilization . Ra takes the reader back to the endless possibilities of childhood. "You will step out of the pages of the blinding-blend of the book and gaze astounded at the endless space of the Cosmic Void...you will learn to journey with courage - with the fiery aim to reach the even greater day of the even greater tomorrow... (The Cosmic Age, 1968)