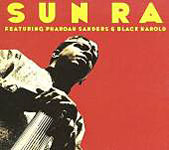 Sun Ra featuring Pharoah Sanders & Black Harold is a near mythical document of the astral traveling Arkestra. There are two reasons for this. Firstly, this recording came a year before the now historic and certainly definitive Arkestra records, Heliocentric Worlds Vol. 1 & 2 (ESP, 1965) and Magic City (Saturn, 1965) that came hot on the heels of the ESP release. Secondly, the recording feature 45 minutes of unreleased material pertaining to a breathtaking concert presented by the Jazz Composers' Guild at Judson Hall, NY in December 1964. Also, it is here that Pharoah Sanders (correctly identified at the time as Ferrell Sanders by critics A. B. Spellman and Down Beat's Don Heckman) is heard for the first time with the Sun Ra Arkestra. So why release this material now?

First of all, this is ESP and it was, after all, Bernard Stollman who opened the gates for aficionados to worship at the altar of the new sound. And the ESP disk catalog today is full of the riches of the so-called avant-garde—from Giuseppi Logan (Featuring Don Pullen) to Paul Bley and Albert Ayler and—even before the New Thing of the '60s—some very rare material recorded by Bird from 1940 to 1947. And then there is the music itself. Even if weren't for the primordial squawking of Pharoah Sanders' tenor saxophone and the wild romps of Black Harold's flute, here is a touchstone for the idea that there is a new cosmology in music. Ra's use of the tinsel-like tone of the celeste, blended in with his rapid runs on the piano, played over a bowed bass line by Ronnie Boykins, especially in "Cosmic Interpretation" suggests that he had come to create a sonic metaphor for the "relative silence" of outer space, a place where the soul roamed free. It is significant the cacophony of the horns and the almost angelic tones of the keyboards begin to ring in a startling contrapuntal device in tonal scripture.

From the cosmos to "The Other World," it would seem that the counterpoint is the desperate message of the Afro-centric life as evidenced by the majestic drumming. A quick study of the titles may also reveal that Ra is beginning to separate from Mothership Earth. Why else would he anchor "The Other World" in a world of polyrhythmic drumming? And then there appears to be an out-of-body experience as the soul hovers above Israel. Could this too be a departure from the Semitic origins of Man in Ra's Book of Life?

There are no answers, only clues, the best of which are in the music itself. This is a magnificent introduction to the Arkestra that shortly thereafter embarked on its Heliocentric journey. Sun Ra, together with a select expeditionary force is about, it seems, to undertake a journey on behalf of body and soul and take music into the stratosphere of modern sound.

Cosmic Interpretation; The Other World; The Second Stop Is Jupiter; The Now Tomorrow; Discipline 9; Gods On A Safari; Pocket Number 9; The Voice Of Pan; Dawn Over Israel; Space Mates.