By Doug Collette
July 16, 2022
Sign in to view read count
Blues Deluxe is a regular column comprised of pithy takes on recent blues and roots-music releases of note, spotlighting titles in those genres that might otherwise go unnoticed under the cultural radar. 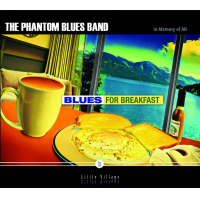 The hyperbole of Bill Bentley's liner notes notwithstanding, The Phantom Blues band have indeed achieved something extraordinary with Blues For Breakfast. That is, the sextet has forged an identity of its own apart from that in play when they are backing Taj Mahal (as they have for some three decades). It takes a markedly different set of skills to accompany than to play effectively solo or as a group, but the choice of material here—ranging from Muddy Waters to Sam Cooke to Ike Turner— is testament to collective taste and technique as much as their originals. Plus, the way it's all arranged to incorporate a litany of familiar names only serves to augment the overall authenticity of these proceedings: from the horn-accented high-stepping of "I Take What I Want" to the sure grip on the reggae-rhythm of "Move On Up," then on to the slinky "Still Be Friends," the ensemble maintains a down-to-earth and infectious mood for the course of their fifth album. Produced and mixed by Johnny Lee Schell (who's played with guest singer Bonnie Raitt), it could hardly sound more heartfelt or honest—if not exactly transcendent— as a tribute to the late founding member of PBB, keyboardist/vocalist Mike Finnigan. 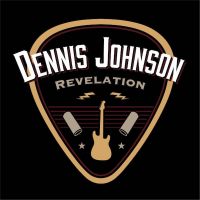 Guitarist/songwriter/vocalist Dennis Johnson spared no expense on Revelation, and rightly so, procuring engineer/producer Kevin Shirley (Journey, Rush etc.) to mix the one track Chris Bell did not, plus contracting with Lurssen Mastering to oversee that engineering for the entirety of the album. One of the preeminent slide guitarists of our time is nothing if not ambitious in opening these ten-tracks with a measured arrangement and performance of the much-covered Don Nix number "Going Down." From there on during the thirty-seven minutes or so, it's a well-paced mix of peppy tracks such as "32-20 Blues" with the more contemplative likes of the instrumental "Talk To You." And while much of the material may look (overly?) familiar at a glance, producer Johnson imbues the likes of "Please Don't Go" with his ever-imaginative slide work, all of which he deftly places within the stylish musicianship of accompanists including drummer Anton Fig (Letterman Late Night Band, Joe Bonamassa). There's much more in the music than meets the eye in the credits too: Gary Clark, Jr.'s "Don't Owe You A Thing" belies how similar is much of this material, while Dennis Johnson's stock-in-trade technique, his nimble and versatile slide work, distinguishes it all. 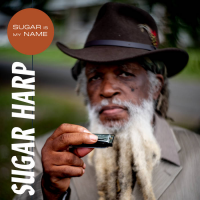 The air of self-assurance that permeates Sugar Harp's performances on these ten tracks is only that which comes from decades of hearing and playing his chosen style of blues. And certainly the Birmingham AL native has history, but Charles Burroughs has surely come along way since that time under his assumed name: for one thing, the lubricious likes of the lyrics on "Special Recipe" can only be the work of a wizened body, heart and soul. But the measured beat behind his saucy harmonica speaks volumes that language cannot, evidence that the man's experience inspires the musicians supporting him here. It all sounds as relaxed as can be over the forty-two plus minutes playing time, but the relative quiet belies the emotional undercurrent emanating from a man who feared his playing days were over as of November 2019: there's no sense he's taking anything for granted on songs like "I Don't Want A Soul Hangin' Round," just a solid sense of self and a clear-eyed vision of the world. While numbers like "My Truck, My Dog, My Wife" may be a pastiche of blues motifs, there's no denying how they become freshened arising from the deep well of emotion inside Sugar Harp. 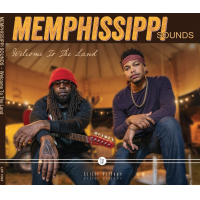 The artful conjunction of words comprising this band's name pales in comparison to its meld of musical styles. Welcome to the Land is a pedigreed piece of work by dint of lineage—Cameron Kimbrough's grandfather is Hill Country music icon Junior—as well as its recording site: Memphis TN's Sun Studios. From the first notes on "Who's Gonna Ride," the sound is at once ancient and timeless (though the droning wears near the homestretch of this forty-six some minutes playing time) as producer Akarsha "Aki" Kumar captures the natural fluidity of the two musicians. Damian Pearson's vocals, harmonica and guitar mesh with his partner's vocals, drums and guitar in such a way they generate a sense of self-propulsion during tracks like "Go Downtown" and "Look Out For the Wolf," so their instrumental bond sounds much larger than just a pair of players. Still, the duo's greatest distinction may well be how they've virtually indiscernibly incorporated contemporary influences such as Metallica, Dr. Dre and George Clinton with the vintage blues sources of Howlin' Wolf, John Lee Hooker and Muddy Waters. As accessible as it is raw based on the readily-apparent spontaneity in the nine tracks, Memphissippi Sounds transcends its roots. 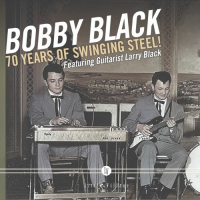 There's chops on your instrument, then there's showing off with it and, as this thirty-nine minutes attests, Bobby Black belongs in the former category. But this eleven-track, largely instrumental compilation of live radio broadcasts, performances and studio sessions, curated by musician/journalist Myles Boisen, doesn't just document this steel guitar pioneer's technical skills. It's also a depiction of his empathy for the talent of other musicians, not the least of whom is sibling Larry on six-string guitar. Joyous and upbeat as most of it all sounds, especially when the bass and drums of a rhythm section appears as on "Water Baby Blues," there remains the ever-so-slight but tangible air of foreboding at the heart of blues and country music at its most pure. To call this a tour-de-force is to understate its impact more than a little, especially in noting covers in the form of Duke Ellington's "Take The A Train" and George Gershwin's "A Foggy Day In London Town," but the temptation to hyperbole remains. As the music rings out on "Arkansas Traveler" among others, its infectious nature arises directly from how effortless Bobby Black makes it all sound as he connects with his various and sundry collaborators. 19

Tracks: I Take What I Want; Get Involved; She's Into Something; Move On Up; OK, I Admit It: Still Be Friends; Country Boy; Laughin' and Clownin'; Stepping Up In Class; I Know You Don't Love Me; That's What Love Will Make You Do; Stuff You Gotta Watch.

Sugar Is My Name

Tracks: Sugar Is My Name; Special Recipe; How Come My Dog Don't Bark; I Don't Want A Soul Hangin' 'Round; Lemon Squeezin' Fool; May Your Soul Make It to Heaven; My Truck, My Dog, My Wife; Leave The Same Way You Came; Mojo Hand; Murder, Murder Murder.

Tracks: Who's Gonna ride; Groove With Me; I'm Mad; You Got The Juice; Crossroads; Go Downtown; Saturday Morning; High & Low; Look Out for the Wolf.

Tracks: Panhandle Rag; Lady Be Good; Arkansas Traveler; Tippin' In; Water Baby blues; A Foggy Day In London Town; Take The A Train; Do Nothing 'Til You hear From Me; Guitar Haven; My Window Faces The South; The Honky Tonk downstairs; The Buccaneer Saloon medley.