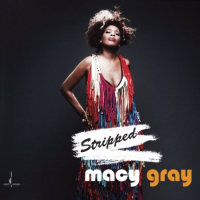 It should come as no surprise that vocalist Macy Gray would make a jazz record. Renowned for her platinum trajectory in popular music, Gray always exhibited inherent jazz and blues inclinations in her vocal style and personal demeanor. Stripped is her debut on Chesky Records, recorded in a live setting with their singular binaural microphone technique, accompanied by a premier jazz ensemble.

Gray is certainly no stranger to jazz, as she has recently collaborated with saxophonist David Murray on a series of projects, and she considers herself a jazz singer at heart. As is customary, Gray reinterprets her own material, as well as several covers, all performed in a minimalist atmosphere, with maximum emotional intent. Guitarist Russell Malone introduces the bluesy "Annabelle," as Gray eases in with her trademark understated singing, ending with a light chorus by the band. A mellowed version of the "Bo Diddley beat" sets up "Sweet Baby," highlighted by the muted trumpet of Wallace Roney.

Gray's most identifiable number, "I Try," is re-imagined with jazz sensibility, defined by Daryl Johns, whose acoustical bass is the bedrock of the music. The laid back sizzler "Slowly," displays Gray's ability to lay her vocals against the swaying cadence of the band, and "First Time," brings out the deft brush work of Ari Hoenig on drums, for the perfect romantic backdrop. The spirited "She Ain't Right For You," is presented with a driving reggae backbeat; and as a pleasant surprise, Bob Marley's "Redemption Song," sails gently across the Caribbean in search of tranquility. The wild card track is the Metallica cover "Nothing Else Matters," enclosed within a straight ahead bop arrangement, which transforms it into another dimension. Roney's solo on this tune, shows what a jazz artist can do when given free rein to do his thing. They keep the simmering flame ignited with "The Heart," in what could be construed as a contemporary blues, an idiom where Gray demonstrates passion under pressure. The weeping trumpet opens and intertwines within "Lucy," a sultry depiction of the conquest of love, and the promises that entails; Gray toying with the bawdy lyrics and spicing up the double entendre.

Produced as one of the Chesky Binaural + Series, this record showcases Macy Gray in what might be her bona fide persona. Recorded with no over dubs, in a two-day session, this is as close to a live gig as one could imagine, with spatial realism and no audience background noise to hamper audio quality. Gray is a throwback to the early days when jazz singers were not pretentious, but had to rely on their innate talent to carry the tune with raw emotion and sensual grace. Let's hope Chesky and Gray hook up again for an encore performance.

Annabelle; Sweet Baby; I Try; Slowly; She Ain’t Right For You; First Time; Nothing Else Matters; Redemption Song; The Heart; Lucy.