BY GLENN ASTARITA
August 22, 2016
Sign in to view read count 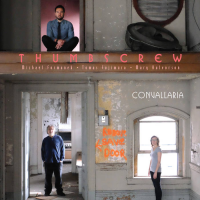 Three hyper-progressive improvisational jazz and cross-genre artists push the envelope again on their 2nd album for Cuneiform Records. The musicians' busy schedules via numerous and largely prolific solo and group-based projects have rocketed their respective artistries into the limelight, especially ECM recording artist Michael Formanek (bass) who for the past several decades has become a household name within these circles. Nonetheless, it's an adventurous exploration, led by guitarist Mary Halvorson's signature phraseology, comprised of extended lines that vaporize into the cosmos amid her diminutive note-bending jaunts and so on. Here, drummer Tomas Fujiwara generates a buoyant underpinning with colorful accents in parallel with Formanek's fluid and powerful support.

The album moniker refers to a sweet scented but poisonous plant. Regardless, this is a guitar trio exposition of a different color as they toggle between jovial encounters and ravenous dialogues. Subtle surprises abound. For example, on "Trigger," Halvorson's pensive opening statements are contrasted by drummer Tomas Fujiwara's tranquil toms pattern, leading to the guitarist's reverberating chord voicings and eerie electronics treatments. Essentially, it's a floating and somewhat bizarre dirge-like ballad.

At times the trio delves into punk jazz frameworks, eliciting notions of a Sonic Youth type attack. But "Tail of the Sad Dog features Halvorson's EFX, hazy distortion soundscapes and oddball phrasings atop an asymmetrical workout, tempered by Formanek's capacious passages. They build upon a simple oscillating motif, subsequently elevated into a pulsating exposition. And while there aren't a host of hummable pieces, the trio's dynamic inner-workings, crafty risk-taking maneuvers and discernable fellowship sustain a high level of interest.