BY MARK CORROTO
November 1, 2001
Sign in to view read count 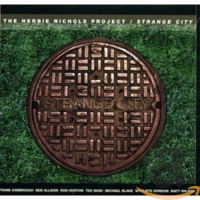 The Herbie Nichols Project releases its third recording of the one-time lost genius, Herbie Nichols. Co-led by bassist Ben Allison and pianist Frank Kimbrough, the HNP was created as part of the Jazz Composers Collective, a non-profit musician-run organization, to present original music. By choosing the work of Nichols, Allison and Kimbrough have re-ignited interest in a true genius of modern music.

Herbie Nichols, born in 1919 in New York of immigrant parent from St. Kitt and Trinidad, was a contemporary and friend of Thelonious Monk. Initial response to hearing his music is how akin it is to Monk's music. Like Monk, he composed a highly personal music. Where he diverts from Monk's conception is in reliance on composition. Where Monk favors improvisation, Nichols leans on composition. Nichols died in 1963, at age 44, having only recorded a handful of sessions and only in a trio format. These recordings were out-of-print and reissued in the last seven years by Blue Note and Bethlehem. Nichols' music was kept alive over the years by Roswell Rudd, Steve Lacy, Misha Mengelberg, Duck Baker, and more recently by this Herbie Nichols Project. The HNP first two recordings, Love Is Proximity (1996) and Dr. Cyclops' Dream (1999) are both on the Italian label Soul Note.

This latest edition of the HNP is a septet, although only a few tracks realize the entire band. For the most part the tracks alternate orchestrations to feature different musicians. Since Nichols never recorded with horns, the HNP has taken the liberty of arranging the music to fit Nichols conceptions. What we find is music as conversant as Monk's, but one that fits larger ensembles better. Remember how much better Monk sounds in trio than in big band on the At Town Hall recording? Credit the slick arrangements and deft playing. This band, which now includes the soulful Wycliffe Gordon on trombone, features some brilliant talent. Highlights include Ron Horton's fiery trumpet/flugelhorn solos, Allison and Kimbrough's duet on the ballad "Change of Seasons," and the playful drumming of Matt Wilson. Thanks to this collective, the music of Herbie Nichols sounds beautifully familiar to one's ears.