By DAN MCCLENAGHAN
February 9, 2010
Sign in to view read count 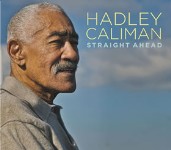 With Straight Ahead, he steps out further into that territory, with a group of Origin Records all-stars on board to give a modern tinge to a tried-and-true format.

The disc's Straight Ahead title, and a lineup of piano/bass/drums rhythm team with a saxophone and trumpet out front recalls the sixties Blue Note Records sound, and that's accurate here. But there's a modernization of sorts, with Eric Verlinde's quirky/pretty, ebullient piano playing, joined in the rhythm section by bassist Phil Sparks, an Origin Records stalwart who stays deep in the pocket beside drummer Matt Jorgensen, who lays down grooves and weaves loose textures.

"Cigar Eddie," a Caliman original, opens the set with a rollicking piano intro followed by on some clean two horn harmony. Trumpeter Thomas Marriott joins the leader in the front line, blowing with a clean, crisp tone before a Caliman solo blossoms out of the sonic landscape like a surly—but beautiful—wild flower, prickly thorns on its stem.

The Coltrane influence is heard on a pair of Trane vehicles, Billy Strayhorn's lovely "Lush Life" and Weisman/Garrett/Lane's "The Night Has a Thousand Eyes." The former is an intimate, late night piano/sax conversation, the latter a sparkling, up-tempo ensemble romp, with Verlinde rolling into a brief ride on "The Surrey With the Fringe on Top."

Trumpeter Marriott contributes "Cathlemet," an upbeat tune with a fluid vibe. The trumpeter's solo gleams over a shimmering harmony, in front of Sparks' muscular bass. Lee Morgan's "Totem Pole" has the Blue Note Records signature written all over it, in a no frills, straight-up script, with Caliman sounding especially energetic and inspired.

After three decades away from the recording studio, saxophonist Hadley Caliman has his second straight CD hit in two years with Straight Ahead.