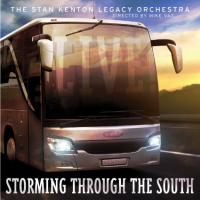 First, three hearty cheers and a laurel wreath for trumpeter Mike Vax who has kept the splendid Stan Kenton Legacy Orchestra together (with some inescapable changes in personnel, not to mention name) for twenty-five years, supervised no less than eighteen annual road tours and produced half a dozen in-concert albums, the most recent of which, Storming Through the South, was recorded during the orchestra's spring excursion in 2015 —sixteen cities in seventeen days covering Texas, Louisiana, Mississippi, Arkansas and Oklahoma. Five stars for that alone!

As always, the orchestra honors and amplifies Kenton's enduring legacy by nimbly blending themes from the Kenton book with sparkling new compositions by saxophonists Joel Kaye and Kim Richmond, pianist Charlie Ferguson, bassist Jennifer Leitham and veteran trombonist Dale DeVoe who revisits and revises "Roy's Blues," a shuffling swinger written for the late British-born baritone saxophonist Roy Reynolds when DeVoe was a member of the Kenton orchestra in the '70s (Philip Hilger sits in admirably for Reynolds on the new version). Also on the menu are "Shell Game," Frank Wess' playful tribute to trumpeter Clark Terry (on which Vax solos and then scats with Scott Whitfield and Jonathan Dane), Joel Kaye's charming arrangement of the Tommy Dorsey theme, "Getting Sentimental Over You," and a pair of vocals by the SKLO's dynamic duo, Whitfield and Ginger Berglund , on Frank Loesser's amorous "Slow Boat to China" and their own flag-waver, "Come Out Swingin'!" (which on the album jacket is said to follow Richmond's "Virna," whereas it actually precedes it).

Kenton always employed a number of superb arrangers of his own, and from his book the orchestra has chosen Rodgers and Hammerstein's "It Might as Well Be Spring" (arranged by Willie Maiden), "You Turned the Tables on Me" (arranged by Lennie Niehaus,) Kenton's arrangement of "I'm Glad There Is You" and the great Bill Holman's powerful take on Ernesto Lecuona's fiery "Malaguena" (a crowd-pleasing finale punctuated by Dennis Noday's high-note trumpet). The orchestra opens with Ferguson's high-spirited arrangement of Pat Metheny / Lyle Mays' "Beat 70," on which he solos with trombonist Whitfield, followed by "Roy's Blues" and Kaye's spicy samba, "Summer Violets," a showcase for trumpeter Dane. "I'm Glad There Is You" (solo by Ferguson) is followed by Leitham's buoyant "Lefty Leaps In"—arranged by Whitfield —on which the southpaw proves she's one of the most accomplished bassists, left-or right-handed, anywhere; other solos are by Ferguson, tenors Rick Condit and Pete Gallio and drummer Claude Askew, former timekeeper for the Airmen of Note.

Besides the lovely "Virna," Richmond wrote and arranged "Passages," a late-model swinger whose earnest soloists are Ferguson, Gallio and Dane. Ferguson also solos (with flugel Brian O'Flaherty and trombonist Dave Keim) on "Virna." Richmond (alto) and the reed section are front and center on "Getting Sentimental." Considering the obstacles sound engineers Tom Johnson and Thomas Hafner had to face and overcome in disparate venues with varying acoustics, the audio quality is by and large adequate if not unsullied. In other words, even though less than perfect, sound and balance are respectable for a series of off-the-cuff concert dates. Setting that aside, the salient point is that the Legacy Orchestra is out there, year after year, on the road and in the trenches, performing without a net while bringing jazz to new audiences, as it has done for nearly two decades. In these days of rising costs and meager attendance, that's a rare phenomenon indeed. It is a labor of love for Vax and the others who enlist each year for another tour of duty, and long may it continue. And now, please join us for a well-deserved round of applause . . .

Beat 70; Roy’s Blues Revisited; Summer Violets; I’m Glad There Is You; Lefty Leaps In; Virna; Come Out Swingin’!; Shell Game; It Might as Well Be Spring; You Turned the Tables on Me; Passages; Slow Boat to China; I’m Getting Sentimental Over You; Intro to Malaguena; Malaguena; Band Intro.