BY KARL ACKERMANN
August 1, 2016
Sign in to view read count 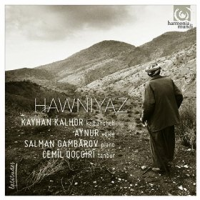 Western music listeners may not be quick to conjure a connection with Iran and improvised music but there is much spontaneity across genres throughout the Central Asian region. One of the few artists known to U.S. markets is kamancheh virtuoso Kayhan Kalhor. The kamancheh, sometimes called the "spike fiddle," is common to Central Asia and dates back to the eleventh century. It has had a long-time presence in Middle Eastern classical music but is frequently used in folk and religious music as well. With three strings—two steel and one brass—the wood-body instrument pivots on a spike to meet the bow and can mimic a range of sounds from that of the human voice to the viola.

Kalhor, a musical prodigy, was born in the Kurdish city of Kermanshah and was creatively influenced by his travels to other regions of Iran where he absorbed particular styles. He is best known as a member of Yo-Yo Ma's Silk Road Ensemble and has had a number of his compositions for that group nominated for Grammy Awards. Kalhor is also a co-founder of the ensembles Dastan and Ghazal, the latter specializing in a blend of Persian and Indian improvisations.

On the album Hawniyaz Kalhor is joined by Kurdish vocalist Aynur Dogan (who uses only her first name as an artist). A regional performer, she has worked with a substantial number of well-connected Western pop musicians. Azerbaijani jazz pianist and composer Salman Gambarov has played jazz clubs and festivals throughout the world and has the most solidly defined background in the jazz genre though he experiments with numerous less-identifiable hybrids. German-born, of Kurdish descent, Cemîl Qoçgirî plays the tenbûr, a long-necked member of the lute family and he is renowned for his experimental approach to the instrument.

Aynur, who sings in her native language, effectively uses her voice as a fourth instrument in the quartet. The kamancheh and tenbûr have a wide range of pitches; both being capable of sounding like multiple instruments and Qoçgirî's harmonizing lute is very versatile in its sensitivity and richness. Hawniyaz runs just under one hour with five long compositions in the vein of improvised Islamic music known as "mugham." The pieces are a blend of this tradition and it's fusion alternative, mugham jazz (Azerbaijani jazz).

Despite the jazz references, Hawniyaz is outside the scope of genres as we think of them. "Delale" is mysterious and far away without being gauzy. Aynur's vocal is powerful in contrast to the elusive sound of Kalhor's kamancheh. The gentle guitar-like plucking of the tenbûr supplies the extended introduction to "Rewend," later taking a more percussive part and combined with Gambarov's piano takes the piece to a jazzier rhythm. Likewise, "Malan Barkir-Bêrîvanê" comes close to jazz improvisation while "Xidire min" and the closing piece, "Ehmedo-Ez reben Im" are uncategorized amalgams of classical, folk and jazz elements. Hawniyaz is a striking album with a very different approach; it is intelligent, accessible and compelling.