Noshir Mody: Stories from The Years of Living Passionately 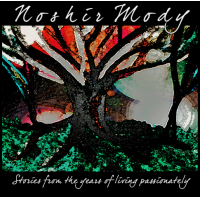 A random sampling of Stories from The Years of Living Passionately could easily leave the impression that this is a hybrid of cool jazz, classical and world music. Even that broad an assumption would not be a comprehensive representation of Indian born Noshir Mody's complex, multi-layered collection of original music. A self-taught guitarist, he can invoke playing styles as diverse as Lee Ritenour, Pat Metheny or John Abercrombie yet his distinctive sound reveals no particular adherence to a form of playing or composing. Stories from The Years of Living Passionately comprises of pieces that are frequently reflective but with a force that resurfaces throughout the collection.

Mody's finely-tuned quintet greatly benefits from the presence of pianist Carmen Staaf. The 2009 winner of the Mary Lou Williams Women in Jazz Pianist Competition, she has performed as a guest soloist with the Lincoln Center Jazz Orchestra under Wynton Marsalis, and has worked with bassist Henry Grimes, trombonist/composer Bob Brookmeyer, and saxophonist George Garzone. Drummer and Japanese native Yutaka Uchida received noteworthy marks as leader on Living Together (Self-produced, 2007). Bassist John Lenis is no stranger to global guitar jazz having performed on Nobuki Takamen's Live at the Iridium (Summit Records, 2010). Rounding out the group is relative newcomer, saxophonist Tsuyoshi Niwa.

Stories from The Years of Living Passionately consists of five long pieces, the shortest being just under ten minutes. Mody allows each to unfold at a leisurely pace but the layers created by the quintet—individually and collectively—maintain and peak interest as the narratives play out. Opening with "The Next Chapter" Niwa's soprano gives way to a head-turning Latin infused romp from Staaf after which Mody picks up the theme, further improvising on it. Much of the early going on "Beckoned by Mercury" is a showcase for Niwa's technical capabilities but again, it is Staaf, whose lyricism and percussive effects emboldens the piece. The common thread in the first two pieces is Uchida's ability to direct the action flawlessly while maneuvering through multiple themes and tempos.

Staaf's classically influenced opening to "India," the sixteen-plus minute centerpiece of Stories from The Years of Living Passionately sets the stage for impressive performances all around. Mody's virtuosity and a fine Lenis solo precede a slightly discordant reset as multiple diversions appear unexpectedly. The album is fine example of impressionism with a distinctive style and an intriguing improvisational approach. The compositions and the musicianship, particularly Mody and Staaf, is first rate and as a whole Stories from The Years of Living Passionately is involving and engaging.

The Next Chapter; Beckoned By Mercury; India; A Pearl Discovers The Oyster; To Be in Your Thoughts.