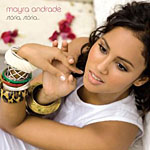 Seemingly coming out of nowhere in 2007, singer Mayra Andrade single handedly rebooted the prevailing stereotype of Cape Verdean music with her debut album, Navega (Sterns). Sunny and gorgeously melodic, the disc provided a counterweight to the anguished oeuvre of Cesaria Evora, the "Barefoot Diva" who had been the international voice of Cape Verdean popular music since the late 1980s. To date, Navega has sold 70,000 copies and rising, quite an achievement for an unknown artist on a roots-based specialist label who's still only 24 years old.

Andrade, of course, didn't really come out of nowhere. She and her music came out of Cuba, where she was born to Cape Verdean parents; Angola, Senegal and Germany, where she was brought up; and Paris, where she had been living since 2003. The mix of cultures was further enriched by a hefty dose of samba, reflecting the historic "trade winds" relationship between Brazil and Cape Verde, both once Portuguese colonies.

Cape Verdean, Brazilian and African rhythmic retentions add a depth to Andrade's unapologetically pretty music, felt in cross-rhythms and beat-shifting meter changes. Sometimes, as in Alves' "Nha Domaxa," these are central to the arrangement; mostly they're more subtle. But they're always present. Another flavor is provided by modern French chanson, reflected in the melody and the use of accordion on "Mon Carrousel." Pianist Roberto Fonseca and tres master Pancho Amat bring Cuba to fore on "Lembransa." And cellist Jaques Morelenbaum's offers the occasional, soulful echo of Evora.

A delightful album, elegant and vibrant in equal measure.