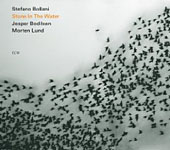 Serendipity can be a wonderful thing. Invited to perform with 2002 JazzPar prize-winner, trumpeter Enrico Rava, pianist and fellow Italian Stefano Bollani first encountered bassist Jesper Bodilsen and drummer Morten Lund when they were proposed as the rhythm section for the Danish award show and a brief tour. The chemistry was on such a deep level that Bollani, Bodilsen, and Lund decided to continue as a trio. Seven years and two albums on the Danish Stunt label later, Stone In The Water finally gives the trio the international exposure it deserves. Aesthetically akin, in some ways, to Swedish pianist Bobo Stenson's trio, it's the year's most sublime piano trio recording, where silence and the power of understatement are as definitive as the virtuosity that underscores this group's uncanny empathy.

Stone In The Water's soft, elegant mix of original material from Bollani and Bodilsen is augmented by two Brazilian songs and—referencing Bollani's ECM leader debut, 2007's Piano Solo—an improvisation based on the music of classical composer Francois Poulenc. Each player's fluidity alone combines into a one-hour set that occasionally comes to a simmer , as it does on Bollani's "Asuda," but never reaches a boil; a very good thing as the trio seems to hover over that tipping point, creating a delicate strength that contrasts with profound implication.

Bollani may play Rava's Puckish foil when the two perform together as a duo but, despite no shortage of improvisational playfulness here, it's less comedic, and more finely attuned to the inherent compositional beauty. Brazilian songwriter Caetano Veloso's "Dom de iludir" opens the disc, with decaying notes, spare chords, and economical yet powerful melodies setting the tone for the rest of the disc. In a true evolution of the Bill Evans tradition, Bodilsen provides a consistent lyrical foil for Bollani and, when it's the pianist out front, the bassist's unerringly modest choices make this a definitive reading.

Modest is a good way to describe this trio. Despite its clear facility, this is a listening trio, with egos checked at the door. Lund, in particular, impresses with his refined sense of swing and unfailing allegiance to a groupspeak that's about collective voice rather than individual grandstanding.

And yet, it's impossible not to appreciate this trio's harmonic sophistication and overall technical skill, as it refines and modernizes a jazz tradition merged with European impressionism. "Bollani's "Il cirvello del pavone" may begin with a hint of Thelonious Monk-ish angularity, but Bollani's light, dancing touch is a far cry from the legendary pianist's quirky ideation, as the piece moves to a bass solo where support is so elusive as to only reveal itself when taken as the sum of its parts.

Whether it's the more heated exchange of Bollani's solo on "Il cirvello" or the darker exchange on Bodilsen's indigo-shaded "Edith," Stone In The Water lives up to its name. Like ever expanding ripples, this trio's music is a constantly expanding soundscape of color and finely honed lyricism; the culmination of seven years playing with egos in check and ears wide open.